When people ask why I am building this site and the course they get three answers. One, self-made billionaires and tycoons are the best people to study if you want to truly understand business. Their exploits provide not only a wealth of insights into the timeless strategies and tactics for wealth creation but also into how the world really works. They are the ultimate realists who use and game the system for their advantage. 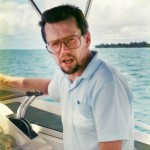 Second, some of these guys border on certifiably crazy which makes them all the more compelling characters to study.  I am specifically referring to the fact that their craziness enables them to create their own reality whether it be for good (e.g., Bill Gates) or bad (e.g., Howard Hughes).

Third, it’s about a universal longing for freedom in a world where every square inch of turf is controlled by a nation state and all the rules and regulations that come with it. Billionaires are the only individuals that come close to matching the power of nation state. Some tycoons have even bought their own countries.

Although Larry Hillblom “went Colonel Kurtz” in the jungles of the Pacific he still exemplifies what can happen when you combine a nose for spotting opportunities, a bit of craziness, and a longing for freedom.

Here’s the trailer for the film about Larry.

Life is too short to be small. – Benjamin Disraeli