Be sure to read part 1 first!

To be successful, keep looking tanned, live in an elegant building (even if you’re in the cellar), be seen in smart restaurants (even if you nurse one drink) and if you borrow, borrow big. – Aristotle Onassis

The story of Onassis’ empire becomes that much more interesting, and dare I say “exciting,” if you understand its basic structure and dynamics. So lets take a look at the industry back then. To start with, there were typically two types of ships that you could own: liners and tramps. Liners carried passengers and general cargo on fixed routes and schedules. If you had a Liverpool to New York ticket you had to be there to board on time or you would miss it and have to wait for the next sailing. The Titanic is perhaps the most famous example of a liner. For this reason liners can be thought of as the “buses” of the sea. 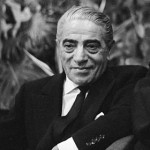 In contrast, tramp ships carried the dirty stuff such as coal, ore, grains, and bulk cargo. Another difference is that they didn’t operate on fixed routes and schedules. Instead they chased business wherever they could find it in the spot market. They had to be on call 24/7 to have a shot at securing a delivery contract. For this reason, you can think of them as the “taxis” of the sea. (The only famous tramp steamer I can think of is The Nostromo in Ridley Scott’s 1979 film Alien.)

Not surprisingly, the large liners were owned by wealthy cartels while the tramps were usually owned by small firms or even individuals who often served as captains of their own vessels.

There were two basic ways to make money in shipping. One way was through operations. The other was through so-called “asset play.” As you may have guessed, operational profits came about from efficient operation of the ships and the maintenance of sufficient profit margins. Asset play, in contrast, referred to the wheeling and dealing in ships based on the ability to predict demand two or three years into the future. The goal was to buy low and sell high. This was unfortunately very tricky as the market could turn on a dime if a crisis occurred. If you had bought and chartered a ship for ten years when fees were low you remained irrevocably locked in after they skyrocketed. You had to have a gambler’s nose and nature to play this high stakes game.

After WW II his shipping business took off as he acquired more and more ships through asset-play. He quickly shifted his focus to tankers because he recognized the post war megatrend towards car ownership in places like the U.S.A. and Canada would increase demand for oil. For a brief spell he also ventured into the whaling business but withdrew after a few short years.

By the fifties the oil tanker business was dominated by Onassis, his dashing brother-in-law Stavros Niarchos, and American Daniel Ludwig. The three quickly became involved in a great tanker “arms race” to see who could design and build the world’s largest and fastest oil transports. Average ship size increased dramatically in the i950s and 60s.

As soon as Onassis had reached a critical mass in terms of fleet size in the late 1940s, he embarked on an aggressive global growth strategy. His goal was to build the largest and best tanker fleet. To achieve this he was willing to do whatever had to be done.

-If something happened to be illegal in one jurisdiction he simply moved it to another where it didn’t raise any eyebrows.

-He engaged in smuggling early on and broke various embargoes over his career, which based on my readings, appears to be a popular bootstrapping strategy with tycoons. (Once you realize just how corrupt many embargoes were and still are, their breaking doesn’t seem like such a bad thing. Oftentimes the governments involved looked the other way because they needed the revenues generated by the “illegal” sales.)

-He used and improved upon innovative financing techniques to build his fleet. For example, when he needed another tanker he would first find a company to charter it for ten years. Then he would use the charter as security for a bank loan to construct the ship on the understanding that payments wouldn’t begin until the ship was in service a year or two down the road and earning charter fees.

-He schmoozed with everyone from captains of industry to politicians to celebrities. He did so frequently aboard his famous yacht the Cristina O.

Onassis represents the quintessential self-made man. In addition to being hyper-competitive he was a man of passion and by many accounts a good friend to have.

You can discover more about him here:

Aristotle Onassis the Tycoon Who Bought a Country

3 Responses to Adventures of a Hustler: Aristotle Onassis Part 2