Frontier capitalism: Economics in transition from state ownership and control of resources to a private ownership system in which the price system is used for resource allocation.

While you have no doubt heard of extreme sports by now, my hunch is that many of you have never heard of “frontier capitalism,” which is the “extreme” version of capitalism.” Personally, I don’t think the frontier capitalism label actually goes far enough in capturing the essence of this high stakes game played in some of the most dangerous regions around the globe. Therefore, I prefer “extreme capitalism.”

To get a better handle on what it is it helps to understand what happened in Russia right after the collapse of the USSR in 1991. In a nutshell, the economy collapsed to Third World levels. Average life expectancies for Russians plummeted by 15 to 20 years. People  were literally starving and dying in the streets because the old command economy was no longer there to feed them and nothing else had filled the void. As a result it wasn’t too long before the old Communist Party started telling Russians, “See, we told you capitalism and free markets wouldn’t work. Now you need to re-elect and put us back into power.” During the 1990s Boris Yeltsin was the president of the newly formed Russian Federation. While he was committed to reforms that would bring about a western-style economy, he also had to deal with the catastrophic consequences of the overnight transition.

In his book, The Oligarchs, Pulitzer Prize-winning author David Hoffman describes the Russian turmoil during the first half of the 1990s and the issues the Yeltsin government struggled with in introducing capitalism to a country that had only know communism for some 70 years and which had been pretty much a feudal society before that. He uses boxing as an analogy. Suppose that you wish to introduce the sport of boxing to a country without any experience with it. Ideally, you should first take the time to construct the boxing rings, formulate the rules, and train the boxers and referees before holding any bouts. However, if you were facing the kind of pressure that Yeltsin and his cabinet were facing, you might have considered a second option. This second option was to simply entice men into pummeling one another in the streets and hope that the infrastructure and rules would evolve over time to civilize the contests. 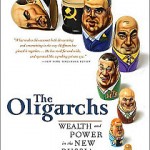 The Oligarchs by David Hoffman

In the end, this second route is the one that Yeltsin chose because it was the only way he could see the communists being stopped from taking over again. His primary tactic in pushing capitalism was to start giving away huge assets to individual Russians. The theory was that if a critical mass of national assets could be quickly dumped into private hands there would be no going back to the old way. Thus began the biggest giveaway of manufacturing and natural resource assets in history.

Unfortunately, because there were no rules, no referees, and no rings, to use the boxing analogy, the situation quickly devolved into a street brawl. Specifically, if you had begun to acquire assets you then also had to hire body guards to protect you, your family, and your business assets. Hoffman tells some fascinating tales of the new tycoons, or oligarchs as the Russians calls them, having to travel to meetings in Moscow in convoys of armored limos and SUVs. One oligarch employed a personal army of an estimated 1000 former military and security personnel to protect his interests. Sometimes there were the equivalents of Mexican Standoffs between armed personnel representing two opposing oligarchs. The solution then was to see who could bring in the highest ranking government official to make a judgment call in their favor.

Throughout the 199os Yeltsin and the oligarchs formed a mutual preservation society. They gave him the necessary funding to win elections and keep the communists out of power. He in turn rewarded with more and more state assets.

There is one story vividly described by Hoffman that stands out as a scene from the apocalypse. Back then Russia had the world’s largest automobile manufacturing plant. Nothing in Detroit or elsewhere approached its gargantuan size. The plant churned out thousands of cars daily and had an assembly line which was a mile long, if I recall correctly. After the collapse of the USSR various Russian Mob factions, Chechen gangs, and other criminal outfits would take up position at the end of the assembly line and and steal the cars as they rolled off the assembly line. The workers and managers inside, whose only concern was continuity of their pay checks, carried on producing cars as if nothing untoward was happening outside. On many nights there would be violent scuffles outside between rival gangs of thugs over who would fill their quota of stolen automobiles first and go home early.

If you are interested in learning more, you can’t go wrong with Hoffman’s The Oligarchs.

While I don’t recommend that anyone go pursue their fortunes in the former USSR countries, these stories make for great bed-time reading.

Listen to this tale told by Bill Browder about how as a young man out of college he decided to seek his fortune in Russia.

Find out how Mo Ibrahim made a fortune selling mobile phones to Africa’s poorest.

Finally, at least for now, here’s a story about how one ordinary American went to the former USSR republic of Kazakhstan to make his fortune and got into hot water.

One Response to The Quest for High Growth: Frontier Capitalism