Arbitrage: the practice of buying something in one place and selling it (almost) immediately in another place where it’s worth more.

My initial introduction to the arbitrage game came while I was working my way through college. I was fortunate enough to land a high paying job as a floor trader for a boutique investment firm. During lulls in trading activity you could do two things: play practical jokes on the other traders or find ways to make some more money. I opted for the latter and began buying stocks up that could be instantly resold on a different stock exchange for a profit. The money was not so much in the tight spreads as in the volume. If you did enough arb trades each and every day you could make a good income. Sadly I had to give the job up eventually because its hours only allowed me to take late afternoon and evening classes. If I was going to complete my degree within an acceptable time frame the mornings and early afternoons had to be freed up. 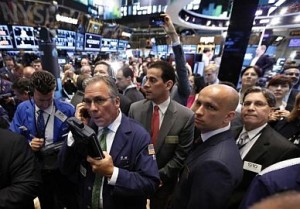 Now let’s take a quick look at how entrepreneurs working with smaller privately held companies can benefit from the earnings arbitrage game starting with the most obvious. Think of all these as just another growth strategy.

All else being equal if a private and a public company both have the same amount of earnings, the latter’s will be valued higher by the market place. If both companies have earnings of $5 million the private one’s may be valued at a multiple of say 4X or 5X. Those of the public entity may be valued at 10X, 20X, or even 50X, depending on an assortment of variables.

Now here is where it gets interesting. Let’s imagine that it makes business sense for the public company to acquire the private one. It then buys the private company for a multiple of 5X or $25 million. Like magic that $25 million is then instantly transformed into $50 million. How? Well, if our public company’s earnings are valued at a 10X multiple then the $5 million in acquired earnings are also multiplied by 10X to achieve the $50 million jump in the public company’s value. This is why a publicly traded company is often the best buyer for your business.

Pro Tip: The Deal Has to Move the Needle

Now the deal has to have the potential to move the public company’s needle (i.e, share price) to be attractive. This requires us to think in terms of size ratios. In my above example I made both companies the same size in order to simplify matters for those new to this subject. In real life a company might have a financial challenge in swallowing up a similar sized one so it’s better to look for a bigger buyer. How big, I hear you ask.  Well not too big.  If you are hoping to sell a company with $1 million in earnings to a company with 100X or 1000X that in earnings, the latter is unlikely to be interested because the acquisition will not move its share price up.

So like Goldilocks you want to talk to buyers who are neither too cold nor too hot. A buyer with 20X to 30X your earnings represents your “sweet spot” for a deal. That’s a ratio in the range of 20:1 to 30:1. Such a buyer should see its share price rise.

Redeploy the Business in a More Profitable Industry

In The Tycoon Playbook I recommend a number of good movies to watch one of which is Other People’s Money with Gregory Peck and Danny DeVito. In a nutshell, Wall Street raider Lawrence Garfield (DeVito) launches a hostile takeover bid for a small public company, New England Wire & Cable, run by Peck’s character Andrew Jorgenson. Long story short, the takeover attempt is successful but almost destroys the company. It’s ultimately saved when management discovers that its existing assets can be quickly redeployed to manufacture a new and much higher value product, namely automobile air bags.

Savvy buyers will look for businesses for sale whose assets can be quickly and easily redeployed. This enables them to buy a small business selling at a low multiple, such as 1X to 2X, and very quickly transform it into one with a multiple of 4X to 10X or even higher with little or no capital investment.

Now lets move onto the most common variation of the arb game played by tycoons.

Many budding tycoons play a variation of earnings arbitrage which involves only one business at a time. They start off by acquiring a poorly run business and fixing it up. Most really small businesses (earnings less than $500K) are small because they are badly managed and have poor marketing. Part of the problem is that many of them are owned and operated by the dreaded Be Your Own Bosser. This is the person who went into business for all the wrong reasons. Basically they are forced into it because due to personality problems they can’t hold onto a job. Since most are what we would call insecure “control freaks” they can’t grow beyond a size that would require them to hire managers and start delegating. So like Gollum they hold on tight to their precious as it lies in a state of long term stagnation.

Fixing these types of businesses up is relatively simple for someone who’s educated themselves in basic management and marketing. There are actually follow-the-steps marketing systems for quickly turning around a languishing small business, which for reasons of space I won’t get into here. Suffice it to say for now that it’s not that difficult to take a business with $500K in earnings valued at 1X or 2X to a million in earnings valued at 3X or 4X within 18 to 24 months. This is all from going after the low hanging fruit so to speak. So the business you bought for $500K or $1 million is sold for three or four million down the road. Or it’s kept and leveraged to acquire the next one.

So there you have it, yet another growth strategy the up and coming tycoon can use employ in the pursuit of his first 100 million.