The Profit: Marcus and Murchison-Hume

In 2008 Max Kater founded Los Angeles-based Murchison-Hume a maker of non-toxic cleaning products. She was motivated by a desire to make cleaning products which her son wouldn’t be allergic to.

As is normally the case with companies appearing on The Profit, Murchison-Hume is in crisis. The main reason for this is that Max creates products for herself not her market. Her husband, Peter, who has a day job is subsidizing the business with his income.

Shortly after arriving at the company Marcus mentions that he finds the brand name an odd choice for a cleaning product line. It really does sound like a law firm.

Marcus finds the products over-priced. Items which should sell in the $5 to $6 range retail for $9 instead.  The line is also a mile wide and an inch deep. It includes non-cleaning products such as candles while leaving holes in the cleaning space.

A huge factor in the product line’s high price is the fact that the current logistics system adds $2 worth of shipping costs to every bottle. This is because the product is made in Chicago and then transported to a distribution center in Dallas which in turn ships it to retailers.

Max wants a cool million from Marcus. He makes it perfectly clear that he’s not willing to even sink in half that amount because the product line is such a mess. Marcus then lists off all the problems with the way the company currently conducts its business and offers $25K for 50%. Ouch! After Max composes herself in the ladies room, they agree that Marcus will get 30% for his $250K.

However, Marcus being the tycoon gets her to agree to give him 70% of the new Best in Show line.  This then gives him an additional 20% in the company.

Well, not this time, Marcus.

Marcus reveals his growth plan for taking the company to its first 100 million and beyond.

-The company will shift manufacturing to a local company and negotiate better unit costs.

-The lines will be rebranded.

-The product line will be revamped by eliminating the low margin and low performing items.

-They will be replaced by higher margin ones which are more likely to sell well.

Marcus is initially annoyed when he discovers that Max has tried to pull a fast one on him at the retailer. She called them the day before her visit with Marcus and asked for a better shelving position so that he would be impressed. Marcus being Marcus smelled something fishy within minutes.

After the deal was done and Marcus launched the turnaround process Max started being difficult over attempts to replace her dull labels.

She then reneged on their handshake deal twice.

Their conversation about the $220K in missing inventory was jaw-dropping.

The episode ended with Marcus walking away. 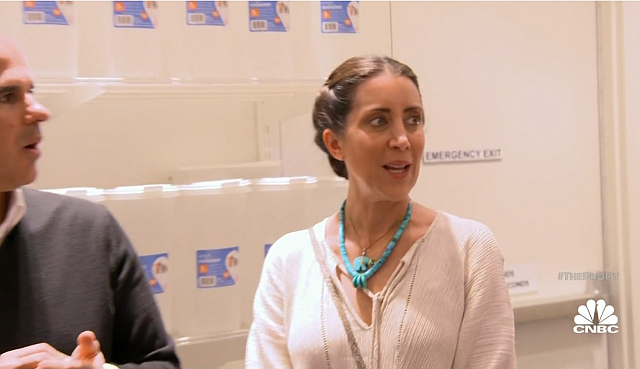 Max Kater is busted at the retailer.

Pay attention to how Marcus broke down both the manufacturing and shipping costs to identify the areas in which savings could be had.

Max is a perfect example of the BYOBer type of owner who’d rather have 100% control of a small mediocre business than a reduced ownership in a much larger successful one. (Use the search function here to find my explanations of BYOBers.)

So why did Max torpedo the deal later? It’s most likely that after hearing Marcus’s plan she figured that she could do most of it without him.

Boy is she in for a surprise.

7 Responses to The Profit: Marcus and Murchison-Hume