King Larry: The Life and Ruins of a Billionaire Genius by James Scurlock

James Scurlock recounts the life of Larry Hillblom, co-founder of shipping company, DHL, who disappeared in 1995 of the coast of Anatahan in the Western Pacific. 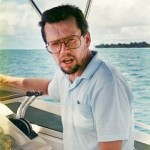 Mr. Hillblom, raised on a peach farm near Fresno, California, co-founded DHL in 1969, just months after graduating from the University of California Berkeley’s School of Law.   Twelve years later, Mr. Hillblom moved to the Mariana Islands, a tax haven and U.S. territory in the Western Pacific.  There he became a Supreme Court justice who re-drafted the island’s real-estate laws and tax codes.  Larry Hillblom’s estate, valued at nearly a billion dollars, has been challenged by numerous parties since his disappearance.

Author James Scurlock speaks at BookPeople in Austin, Texas about his book.