A Review of Carlos Slim: The Richest Man in the World/The Authorized Biography

I really wanted this biography to be a good one. I mean “really wanted.” For me Carlos Slim personifies the very word “tycoon.” I find stories about men who started off with little in life, worked hard to save up a grubstake, and then parlayed it into a fortune over time far more interesting and inspiring than most of the post-1995 stories about tech people who went from zero to billions almost overnight mostly by virtue of having been in the right place at the right time. Yes, luck often played a significant role in their success. Whereas with the traditional tycoon route to success it’s far more the result of a long term commitment to building something lasting.

Now don’t get me wrong, if I were offered an opportunity that would make me a billionaire in the next 12 or 24 months, I’d most likely jump on it. However, I’d then probably feel more like a lottery winner than a real businessman. I say this in part because of all the one hit wonders we have seen since the 1990s who made a fortune on one dotcom, usually because they were among the first ten hires, only to lose it all on the next. (Halsey Minor is just the freshest example of this now all-too frequent new phenomenon.) In contrast, tycoons just build and build. Their growth curve may be bumpy and show the occasional deep dip but it’s one that climbs and climbs over dozens and often hundreds of deals stretched out over decades. I know which is the more impressive feat.

It’s about the journey not the destination, yo!

So I was really hoping that the new Carlos Slim biography would shed some new light on how Carlos Slim made his fortune. Give me the details on how he created his grubstake and got rolling. Alas, it is not to be. (Technically speaking, the book is not new. It’s merely the English translation of a Spanish language book that came out a few years ago.) 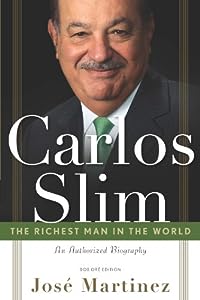 There’s an old rule that you should never trust autobiographies or authorized biographies. In the vast majority of cases, the subject’s goal is to paint a portrait of themselves for history. Successful people want to be remembered as saints who never bent the rules or acted in anything but an exemplary fashion throughout their careers. This is how Carlos Slim: The Richest Man in the World reads. Let me put it this way, if Carlos Slim had hired a writer and PR firm to create a coffee table book about his life, this would be it. It’s really nothing but a fawning coffee table book masquerading as a biography. Even worse, it’s boring.

If you want to read long soporific passages about the history of Lebanese migration to Mexico around WW I, or about Slim’s extended family, or philanthropic activities, you might enjoy this book. Unfortunately the long off-topic stretches make it feel as if the writer’s primary objective was to take what should have been a 20 or 30 page magazine article and fluff it up into a book. You can readily spot the off topic sections by the fact that they often appear in italics and can run for ten pages or more. I quickly got to the point where I was skipping everything in italics. But it gets worse. There’s a section on how handwriting analysis proves that Carlos was fated to become a tycoon. Ditto for his numerological chart which is included and discussed. And finally there is an analysis of his head and facial features that is embarrassingly reminiscent of the old “science” of phrenology.

Now what about business lessons, I hear you asking. Are there actionable lessons in it? Once more the answer is no. The closest the book comes to the business side of things is with these long and rather pointless lists of companies and how much of an equity stake Carlos Slim has in each. These lists can extend for several pages at a time. I got the sense half way through the book that the lists were being recycled as yet more useless filler material.

I am rarely so negative about anything but this biography is a huge disappointment considering the wait for its English version. The subject is one of the most interesting tycoons on the planet and he deserves better. What we need is a biography by a David Nasaw or even a Tom Bower. Indeed, Tom might be the better choice since he leaves no stone unturned and has a snarky wit.

There is one plus to this book. If you suffer from insomnia as I occasionally do, you will find it a potent soporific. Last Sunday I awoke at 8 AM after a good night’s sleep and picked up the book at 10 AM.  Fifteen minutes later I was out like a light for two hours. This happens every time I pick up the book.