How to Build an Empire

If you’re a fan of the Game of Thrones HBO series and now starting to experience withdrawal symptoms, I’d like to make a reading recommendation.

I first came across Conn Iggulden’s historical novels a few years ago. The cover art caught my attention and I made a mental note to try them one day. Well that day finally arrived three nights ago and I’m totally hooked. I refer to his novel Genghis: Birth of an Empire. This is one of those genuinely hard-to-put-down books and I am so looking forward to this weekend where I can mostly relax and read.

HBO really needs to take a long hard look at adapting this into a series. 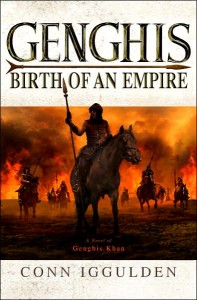 From Publishers Weekly:
“Author of the bestselling Emperor series on the life of Julius Caesar, Iggulden turns to another of history’s great conquerors, Genghis Khan, for a new series of brilliantly imagined and addictive historical fiction. Future conqueror Temujin—a man of iron—is born to the khan (ruler) of a fierce Mongol tribe that roams central Asia’s steppes in the 12th century.

When his father is killed by Tartar raiders before Temujin reaches manhood, a rival claims the tribe and banishes Temujin’s family. Left behind without resources when the tribe migrates, the family struggles to survive the harsh environment, and Temujin dreams of gathering similar outcasts—wanderers and herdsmen—into a new tribe. After assembling a core of these men scorned by all the others, Temujin begins raiding Tartar camps. As his fame spreads, Temujin launches an ambitious campaign to unite the Mongol tribes after a thousand years of warfare into a single people, defeat the Tartars and invade China. Building on the fragments of Genghis’s life, Iggulden weaves a spellbinding story of an exotic and unforgiving land and the enigmatic young man—charismatic, a brilliant tactician and capable of utter ruthlessness—who sets out to tame it. This is historical fiction of the first order.”

By the way, YouTube has a number of one hour programs on Genghis that are worth watching. In addition, there are three movies about him that have come out in the last five years or so.