Born to Steal: When the Mafia Hit Wall Street

Since we’re on the topic of Wolf of Wall Street, I’d thought I’d make another recommendation.

Let me ask you a question first. Do you enjoy horror or science fiction stories where an alien creature attaches itself to the victim and refuses to let go? Yeah, me too! Then you’ll love this book. 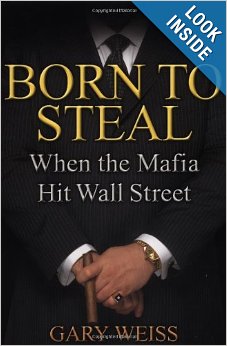 Born to Steal: When the Mafia Hit Wall Street

It’s another biographical account of working in boiler rooms back in the 1990s before the Feds shut them down. This time the story is told from the perspective of a young man who saw all the money that his friends were making and decided to get in on the action. For a while everything went as he had hoped it would. He was quickly earning a good income and enjoying spending it. Then one day the client from hell showed up at his office and insisted on talking to him. The client turned out to be a Mafioso who like others in his profession had concluded that easy money was to be made by “persuading” a boiler room salesman to share his commissions. Apparently a lot of Wise Guys back in the 90s employed this tactic.

The story then quickly turns into a nightmare as the protagonist struggles to shake off his new “partner.” The book is a bona fide page turner. You won’t be able to put it down once you start. It’s called Born to Steal: When the Mafia Hit Wall Street

and as a book it’s actually far superior to Belfort’s. I’m hard-pressed to name another book that was this fun to read. I tried reading Wolf of Wall Street about a year ago and had to stop about a third of the way through. It’s terrible.

This is the true story of Staten Island badboy Louis Pasciuto’s meteoric rise to the top of Wall Street’s notorious chop houses – by the award-winning journalist who broke it. Hood brokers. Monthly million dollar paychecks. Thirty-six hour cocaine binges. “Rocky” themed pep rallies. Run-ins with Mafia thugs toting Mac 10 machine pistols. This was the life of Louis Pasciuto, a fast talking Staten Island kid who, from the age of 19 to 25, moved stocks for 17 different brokerage houses – most of the time without a fake license. This inside account of the Mafia’s infiltration of Wall Street details Louis’ career as the consummate liar, selling phantom stocks to naive Americans and leading a lifestyle worthy of Caligula. To avoid a long prison sentence, Pasciuto eventually became state witness. Now, Gary Weiss shares the inside story of Wall Street’s notorious “chop houses”, best known as the crooked Mob-run brokerages, where rampant thievery netted several billion dollars from gullible investors.

Born to Steal deserves to be made into a movie as well. If you like the Scorsese movie, get this book instead of Belfort’s to read.

In fact, I think I’ll read this one again over the holidays.

Posted in How to Buy a Business, Tycoon Movies | Tagged Jordan Belfort, Wolf of Wall Street