Marcus knocks another one out of the ballpark in the season finale with the Key West Key Lime Pie Company.

If we don’t make it, we don’t sell it. – Marcus Lemonis

The Key West Key Lime Pie Company (KLPC) is located in Key West, Florida and is owned 50/50 by Jim Brush and Alison Sloat. The couple bought the business for $1200 ten years ago. As you have no doubt guessed, the company sells key lime pies. It had sales of $1.4 million last year but no profits before Marcus showed up. It also had $130K in debt.

Let’s do a quick Marcus Lemonis review of the business using his 3 Ps methodology.

Marcus flew down to Key West expecting to meet with a company that created its products from scratch. To his shock he discovered that it was a simple “assembler” of pies using prefabricated pie crusts and off the shelf ingredients. There was nothing proprietary about its products.

In addition to the pies, the company was devoting the majority of its retail floor space (60%) to a wide assortment key lime novelties from third parties all of which had low margins in the 20 to 25% range. In contrast, the pies hovered around a 90% margin. (Doesn’t this remind you of Amazing Grapes?)

KLPC had two locations. The main one was an attractive retail outlet with a commercial kitchen in the back. The second one was leased primarily to serve as a shipping center with a shop added to help cover overhead. The place looked as if it had been furnished at Goodwill Industries. On top of all that it was a huge money loser for the company. While only bringing in about 10-12% of total revenues, it was losing $25K per year. This amount equaled its annual lease payments. Marcus decided immediately that it had to be closed.

Marcus liked the owners and staff. However, while Alison was calm Jim came across as a tough to deal with boss with a nasty temper that could explode at any second. As Marcus pointed out this was due mostly to his fear of the unknown. Jim knew that the business wouldn’t survive unless a major course correction was made, but what was it to be? Do you just surrender 51% to a complete stranger who flew into town yesterday? Now that’s stress. 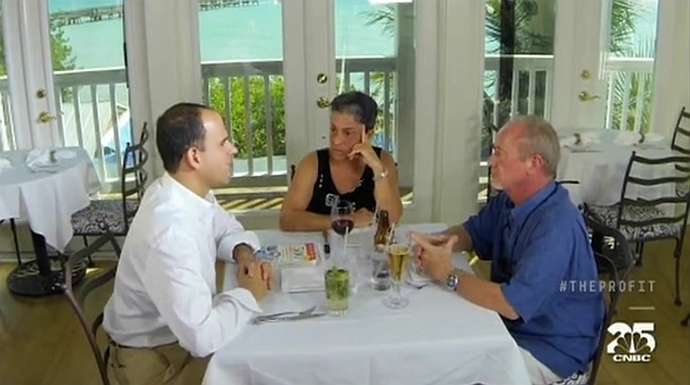 Marcus’s plan was to renovate the main store, create a brand, dump all the low margin merchandise, and start baking pies from scratch with natural ingredients. The pies would have a proprietary recipe and still undersell the competition by $2. The floor space allocation was to be altered to reflect the new business model. According to Marcus, the new website sold 22K pies in just one weekend. Before he arrived the company sold 40K pies in a year. Talk about hitting it out of the ballpark.

How KLPC got out of the remaining 3 years of its lease on the shipping location was never explained.

Now we get to the really interesting part of the story, IMHO.

Marcus offered to invest $450K for 51% of the company with Jim and Alison splitting the remaining 49%. Most of it would be used to pay off suppliers with $95K left over for renovating and branding the main store. Jim immediately rejected this because he couldn’t see himself as a minority shareholder in his baby. Alison had no problem with it. This is typical of situations where a founder is looking at bringing in a major investor. Both will want a controlling interest in the company although there are other ways to achieve this goal.

This is when it got interesting from a deal-making perspective because Marcus did something new and a little bit more sophisticated than before. He told Jim that in addition to their 49% equity stake, they could also have a royalty of $1 per pie. Sell 40K pies and you get $40K. Sell 400K pies and you pocket $400K. Sell a million pies and you pocket a cool million. Jim balked at this again until Marcus used reverse psychology and offered to take the 49% and $1/pie himself. That’s when Jim, with help from Alison, saw the error of his ways and agreed to the deal.

A royalty is a great gap filler in deal-making. My experience with them has been in business sales. Let me illustrate how they are typically used with an example. Suppose that you have a small manufacturing company for sale. Based on its performance over the past three years, it’s valued at $10 million, but the elderly owner has a new widget in the pipeline which he is convinced will double both sales and earnings within its first 24 months of sales. Although he needs to sell the business now, he feels that the company should be priced at 20 million instead of just 10 million to reflect the new product’s potential.

As a buyer you can only go with a valuation based on past performance and not on rose-colored predictions from the seller. So how do you close the deal-killing gap in this instance? One solution is a royalty on the new product that could see the owner receive a lot more, possibly $20 million over time, if all goes as he predicted. A royalty is less messy than an earn-out because, as in the KLPC example, the seller receives a fixed sum for every unit sold. Accounting doesn’t get any easier than that.

You want to avoid deals where contingent payments are based on percentage of profits because profits can be easily manipulated.

Maybe someone bought the Tycoon Playbook for Marcus as a gift? Lets hope we start to see more interesting deal structures like this in future episodes.

For now we sadly have a long wait for season 3.

Posted in How to Buy a Business | Tagged small business growth strategies, The Profit