I have been struggling to get through the huge Warren Buffett biography, The Snowball, for several years now. My first attempt began in 2009 and saw me progress about 70 or 80 pages into it before running out of steam. My second attempt commenced in January of this year and I managed to beat my old record by 30 or 40 pages. However, I seem to have run out of steam yet again. There’s something about this book that grinds you down. Although it’s extremely well researched and written, there’s just way too much detail about Warren’s childhood and personal life as an adult. As a result the business lessons have been excruciatingly slow in coming. (By the way, I was shocked and amused to discover that Warren, who lived an idyllic Henry Aldrich life, was a bit of juvenile delinquent as a boy.)

However, the business lessons did finally start showing up. For example, very early in life young Warren grasped the time value of money. Then whenever faced with the choice of spending or investing a dollar he would think about it in terms of its future value and make a decision based on that. For example, he might conclude, after a quick mental calculation, that the dollar in his hand could be worth $20 at some point in the future based on the return it could earn over a specified period. The decision then came down to “do I spend this dollar for a hot fudge sundae today or have $20 in the future which can then be reinvested over for yet more growth?” 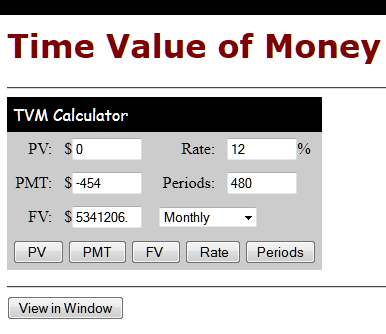 How a a stream of average car payments can compound into millions.

There’s a story about Warren’s friends pestering him to buy a new car at one point. Warren resisted the pressure. Finally they demanded an explanation. Here’s Warren’s famous response: “I just can’t bring myself to buy a new car because if I spend that kind of money it’s going to cost me millions in the future.” This is based on fact that if one took the average car payment and invested it monthly into one of his funds after 40 years it would compound into a 7-figure sum.

John D. Rockefeller had the same attitude about money and time. He always thought of a dollar in terms of its potential future value. No sum was too small for this type of calculation. When he looked at a nickel he saw it as a full year’s interest on a dollar.

In addition, both Warren and John were taught basic book-keeping at a very early age and were instructed by their fathers to keep track of all their incomes and expenses. They would then meet weekly with their dads to review their spending and saving habits. By the way, if you read the biographies of tycoons and billionaires you will discover that keeping accounts in this manner from an early age is pretty much a universal theme.

If you want your kids to end up wealthy, get them started early with these habits. Teach them how to keep their own “books” recording all cash inflows and outflows. Better yet, have them earn their weekly allowances with house chores rather than giving them something for nothing.

The above calculator can be found here.

One Response to How Billionaires Think