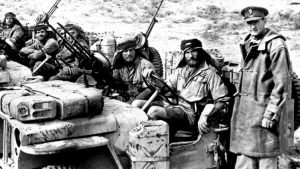 Early SAS unit in the Sahara during WW II.

These three words pretty much sum up the secret to success in both business and romance. Are you prepared to take smart calculated gambles?

The SAS were arguably the first true special forces of the 20th century and were instrumental in the creation of similar units such as Navy Seals, Green Berets, Delta Force, Russian Spetsnaz, etc. They initially operated in North Africa during the early days of WW II fighting against the German Afrika Korps and Italian Army.

One of my favorite YouTubers, LindyBeige, has just created a video about the unit’s creation and early days.

If you want more on the SAS, you will find plenty of documentaries about the SAS in WW II, Falkland Islands War, both Gulf Wars, and other smaller missions.  Writer Andy McNabb is a former SAS member who has had numerous novels published about life in the regiment. They are very good but make sure that you don’t pick up the short ones written for teens.

This is one of my favorite SAS stories from the Falklands War which I discuss in the Tycoon Playbook and extract a lesson from for people interested in applying the tycoon strategy.  See if you can guess the lesson.

Posted in How to Become a Billionaire, How to Buy a Business | Tagged billionaires, inspiration, motivation, SAS