Aristotle Onassis the Tycoon Who Bought a Country

Money won’t buy you happiness but it will get you the yacht that will allow you to pull up alongside of it and say “hello.”    – David Lee Roth

Self-made billionaires caught my attention at a very early age. One of the first to do so was Greek shipping tycoon Aristotle Onassis (b. 1906 – 1975) who achieved global notoriety by marrying John F. Kennedy’s widow Jacqueline in 1968. (She finally agreed to the marriage after being pursued by Aristotle for years. By most accounts, her primary reason for accepting his proposal was financial security for her and her family. For Ari, she was probably the ultimate trophy wife.)

Onassis started his career with little more than ambition but eventually became part of a Greek shipping empire through marriage in 1946 to Athina the daughter of shipping magnate Stavros Livanos. By then he had already built up his own fleet of freighters and tankers. The marriage also made Ari the brother-in-law of a third Greek shipping tycoon, Stavros Niarchos, who was married to Athina’s sister.

For several decades the two brothers-in-law dominated the oil tanker business along with American billionaire Daniel K Ludwig. The rivalry between the men throughout the 1950s and 60s was intense with all three engaging in a “supertanker race” aimed at building the largest ships for  their respective fleets. However, no matter how much money and power Ari accumulated, it was  never enough to assuage a deep-seated insecurity. Deep down inside, he felt himself to be an outsider shunned by polite society and looked down upon by the significantly better looking and more suave Stavros.

Ari craved acceptance and respect. In early 1952 he thought that he had found a way to win both. He did so by purchasing Monaco which was Europe’s traditional playground for those possessing wealth or nobility, or both. Americans who had never heard of the place learned about it after movie star Grace Kelly became Princess Grace of Monaco in 1956 through marriage to Prince Ranier.

The way Ari accomplished this acquisition was by quietly purchasing a controlling interest in Societe des Bain de Mer, a public company trading on the Paris Bourse, which  owned most of the principality of Monaco, including the famed Monte Carlo Casino where James Bond drops by to play Baccarat:

Being accepted in Monaco was the ne plus ultra of social climbing. You couldn’t go any higher. And if you owned the place, they would have to accept you.  Onassis, a Greek born in Turkey, had always felt socially inferior, and having to compete with a brother-in-law like the polished, handsome Stavros Niarchos, who chummed around with Queen Elizabeth and Prince Phillip at Ascot, didn’t make it any easier.

So Onassis had bought Monaco, where he could rub elbows with the royalty of the rest of Europe. But he had gotten more in the bargain. Monaco, however small, was its own country, with its own laws. No other nation’s laws applied. If you owned Monaco, you could do what you pleased there, and nobody would object.  (Source: The Invisible Billionaire: Daniel Ludwig by Jerry Shields) 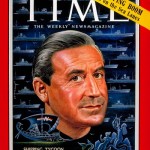 So there you have it.They don’t make them like Onassis anymore, unfortunately. Most of the current batch of technology billionaires tend to be bland personalities. In coming months I will cover the interesting ones such as Ted Turner, Kirk Kerkorian, the original Robber Barons, and a few of the current ones. The more you study them the more you come to realize that they tend to share the same basic set of personality traits.  As stated before, my focus with this blog and course is on the larger-than-life self-made tycoons who made their billions through wheeling & dealing as opposed to building a single company.