The History Channel’s The Men Who Built America

One of the most interesting tycoons of the era was Jay Gould. As mentioned in another post, Jay appears only briefly in the first episode of the series when it tells the tale of Jay and his partner-in-crime selling watered down stock certificates to Cornelius Vanderbilt as he attempted to acquire control of the Erie Railroad. These two characters are worthy of an entire episode in the next segment of the series.

Jay Gould was considered by some to be the finest financial mind among the lot, even more so than banker J.P. Morgan. Gould partnered early on with a colorful character by the name of Jim Fisk who could as easily have been a grifter if he had not been fortunate enough to impress Gould. The two came to have a number of battles with the Commodore. 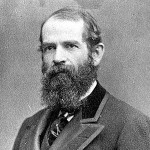 At one point the two rogues found themselves in a cattle-shipping price war with the older and much wealthier Vanderbilt. Vanderbilt tried to put them out of business with his usual competition-killing tactic of slashing his rates multiple times, but Gould and Fisk matched him each time and continued their cattle-shipping operations. Vanderbilt then finally decided it was time for the death blow and slashed his rates down to a suicidal dollar-per-car from the typical $40. Rather than putting Gould and Fisk out of business once and for all, as expected, he was horrified to discover that Fisk had come up with the brilliant idea of first cornering the cattle market and then shipping the head to the stockyards on Vanderbilt’s trains instead of their own. In other words, Gould and Fisk profited by exploiting the practically free shipping offered by their rival.

One of my favorite history books is Matthew Josephson’s classic, The Robber Barons, which tells the tales of the larger than life buccaneers who came to be known by that pejorative title. For a history book, it’s actually a fun read especially if you’re interested in learning about their strategies, tactics, and personalities. Many of the characters in the book made their fortunes by buying and selling railroads and engaging in almost never-ending warfare over these assets.