Power is the best alibi.

Is there any actor better suited to playing wealthy businessmen than Richard Gere?  Well okay, there is Michael Douglas. I suppose they are equals when it comes to these types of roles. Just imagine the two of them together in a film about warring tycoons.

Last night I saw Arbitrage and thoroughly enjoyed it. As I don’t want to risk any spoilers here, all I can say is that it’s the story of a Wall Street Master of the Universe type struggling to keep his empire from collapsing after he suddenly loses $400 million on a bad investment in Russia. He then has to scramble to keep the house of cards standing long enough for him to flip the company to another tycoon.

I will leave it at that. 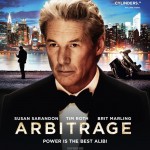