The world lost a great tycoon this past week. Tinkham Veale II was 97. Mr. Veale started back in the 1960s and built a huge conglomerate from an office in a stable, as legend has it. By the mid-1990s, his empire enjoyed sales of over $10 billion and employed 36.000 people. He was both a wealth and job creator. Sadly, too many of today’s so-called tycoons only know how to create wealth by destroying other people’s jobs. 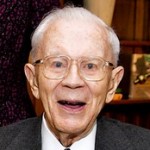 He recognized that small companies have a chronic problem with accessing critical resources. The biggest challenges are access to growth capital as well as professional expertise. Companies couldn’t grow because they “were having a terrible time getting over legal, tax and accounting complications,” Mr. Veale explained. So he devised a strategy to help them which he called “corporate partnership.” This consisted of acquiring small, profitable businesses and keeping their management in place.. He would pay for them with a combination of cash and stock from his public company, Alco Standard. He also implemented generous profit sharing plan to keep everyone fully incentivized.

His investments covered a broad spectrum of industry from motor homes, chemicals, electrical, metallurgical, and liquor distribution. Under Mr. Veale’s leadership Alco enjoyed a compound growth rate of 20% or better for 30 years.

You can read more about him here: Alco Standard Corportation.