I recently watched the History Channel’s program Sun Tzu’s Art of War which in 90 minutes did, arguably, the best job of not only explaining the classic’s lessons but, more importantly, showing how they all dove tail together. If you have any interest in strategy, for business or war, watch the program.

The program reminded me of a controversy that raged back in the 1990s over whether or not, war was a valid metaphor for business. As I read the views of various business book authors I found myself sitting on the proverbial fence. Part of me felt that it was true that business is warfare minus the bloodshed but another part wanted to believe that it was a more gentlemanly affair. Over time I came to accept that business truly is war if you want to build anything significant. If your goal is to settle for running a small Main Street shop out in Springfield, you maybe able to get away with telling yourself that it’s not. The reason for business being war is that building anything significant requires that you upset the status quo and ruffle some feathers. This is going to generate push back from vested interests.

The Art of War became a best-seller in 2001, when television mobster Tony Soprano told his therapist that he’d been reading the book. After that, the book was in such demand that Oxford University Press had to print 25,000 extra copies. 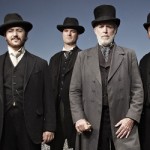 Then shortly after viewing the program, I caught the first episode of the new History Channel series The Men Who Built America, which starts with the first tycoon, Cornelius Vanderbilt, and covers the industrial and financial giants of the second half of the 19th century as well as Henry Ford who is mostly remembered for his early 20th century accomplishments.  With the exception of Ford, these men came to be known by the pejorative The Robber Barons as a result of Matthew Josephson’s classic book.

What ties the two programs together is that tycoons turned out to be masters of Sun Tzu-like strategies and tactics. If you watch the Art of War first you will understand exactly what I mean. The shows provide an excellent introduction to the type of strategic thinking required to achieve something truly significant.

My only complaint about the first episode is that the flow is interrupted a little bit too often by soundbites from celebrities. While I want the analysis of historians the commentary from The Donald and few other TV celebs was just an annoying interruption. Hopefully the remaining three episodes will have less of them.

Read this overview: The Men Who Built America

You can watch the opening episode on Vanderbilt and Rockefeller here. They first air on Tuesday evenings.

2 Responses to How Tycoons Think Strategically