Few have ever succeeded at making such a daunting climb, from the nightmarish depths of utter poverty and hopelessness to the soaring heights of unimaginable wealth and power.

At the age of 4, Jerry Buss was standing in a bread line on the frozen soil of Evanston, Wyo., a gunny sack in hand, waiting for the food that would keep him and his single mother, Jesse, alive for another day. 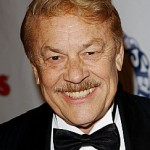 It was 1937, the lingering effects of the Great Depression still gripping parts of the nation.

By the time he had turned 6, Buss’ duties had expanded to include trekking around town in search of old telephone books or other paper products that could be stuffed into the fireplace to provide warmth in a house devoid of heat.

By the time he was 34, exactly three decades after he had stood in that bread line, Buss had made his first million.

By the age of 46, Buss and his business partner, Frank Mariani, had parlayed that million into a real-estate empire that was spread over three states – California, Nevada and Arizona – and was worth an estimated $350 million. (source)

In this 40 minute interview Dr. Buss explains how he made his fortune one day at a time. (This is a podcast that will download onto your machine.)

Thanks to Andrew, a Tycoon Playbook grad, for the heads up on this interview.