How Do You Sell to and Grow in a Market That Can’t Afford Your Product?

If Horace Greeley were alive today he would no doubt be advising, “Go east, young man,” to Africa specifically, to anyone seeking advice on how to make their fortune.  I will add that, in my humble opinion, there is no better way to make one’s fortune than in an adventure. It’s the stuff of biographies and movies. Who wouldn’t want Martin Scorsese eventually doing a biopic of their life?

I have mentioned the billionaire founder of telecom Celtel, Dr. Mo Ibrahim, before with the intention of taking a closer look at his growth strategy in Africa. It’s a fascinating story about creative problem solving. Unfortunately a few projects got in the way and before I knew it a couple of years had passed. Now I return to him.

However, before we take a look at how he made Celtel so successful, I want to take a minute to explain how and why a West Coast kid became interested in Africa and what deterred me from doing business there.

Having grown up in half a dozen countries, I have always had an interest in international business and affairs. As a school kid I followed the daily news closely about how European powers were divesting their African colonies. But it wasn’t until my final year of college that I started thinking of Africa as a possible place to do business. It was most definitely the place for anyone wanting to add some adventure to their life. This thinking may have been triggered in part by the presence of two stunning mid-twentyish blonde twins of Spanish descent on campus. Back then they were campus royalty who looked as if they should have been yachting off the French Riviera instead of dwelling in the library stacks. Few of their fellow students dared to approach them because they seemed so much more sophisticated and glamorous than everyone else. However, everyone was fascinated by them. As they were also majoring in business, I got to know them in my final semester. 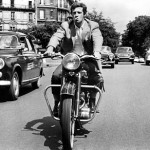 One of the sisters had her wedding day set for the summer after graduation to a wealthy French businessman whom she had met while traveling in Africa. According to legend, one day as she was standing in some hot, dusty, in-the-middle-of-nowhere-spot this scruffy, unshaven fellow, looking like an extra from an old ’70s biker gang movie, rode up to her on a Harley-Davidson and started a conversation. At first she was a bit apprehensive but the two quickly hit it off like wild-fire and, much to her surprise, she later discovered that he was a rags to riches self-made man in the truest sense of the term. He had come to Africa with barely enough cash to cover a week’s living expenses, somehow acquired a grubstake, and then parlayed it into a budding business empire over the next five years. I loved the story of making money under frontier capitalism. So would have Martin. (Marty, are you reading this?)

After graduation I quickly became immersed in my own businesses, but never lost my life-long interest in exotic places and so-called “frontier capitalism.”

A decade later, as I was looking at Africa again, I came across an article on the difference a simple mobile phone could make for low income people in rural settings. The piece explained just how much precious  time and energy is wasted by people who lack any means to communicate with those outside of earshot. It was shocking to realize that the ubiquitous device we take for granted could have such a profound impact on people’s lives. For example, it was common just a few years ago for a person to spend half a day walking to a meeting and then discover that the other party, for any number of reasons good or bad, wasn’t going to show up. They would then spend the rest of the day walking back to their village. That’s an entire day down the drain. Or you might have someone walk for hours to buy medicine only to discover that the shop was out of stock.

I looked at other opportunities besides telecom but each time the Africa experts warned me that any exporter would also have to provide financial assistance to his buyers so that they could afford to the purchase. Now there’s a Catch-22TM situation for you. It stopped me every time when it came to Africa.

Now here’s where Dr. Ibrahim comes into the story. He solved the problem of affordability. Let’s take a look at how.

“Mobile communications was like the Wild West in the 1990s. Everybody was fighting over licenses. But no one wanted to go into Africa.

There was fear. There was ignorance. There were worries. Some of it was understandable.”

Dr. Ibrahim was raised in Egypt and them emigrated to the UK where he studied to become an engineer and eventually earned a Ph.D. in mobile communications. He worked for British Telecom during the 1980s and then left in 1989 to establish Mobile Systems International, a  telecommunications consulting firm, which designed cellular networks. In the late 1990s he shifted his geographic focus to sub-Saharan Africa. Between 1998 and 2003, the market for telecommunications in Africa was growing at a rate 63% per annum which was twice the world average.

However, no one had yet figured out a way to service the rural poor in a sustainable way.

There were numerous reasons for this state of affairs. For example, when someone in a developed country applies for cell-phone service, the first thing that happens is a credit check. This takes a just a few minutes. In rural settings no one has a credit history so it’s difficult to tell who is likely to pay their monthly bill and who isn’t. In addition, few people outside urban areas have bank accounts, credit or debit cards, verifiable incomes, or even fixed addresses for postal delivery. This made the use of the regular business model which relies on selling a service plan to a credit worthy customer and, in some cases, throwing in a free handset impossible.

The challenge could then be summed up as “how can the rural market be persuaded to exchange a portion of its meager disposable income for a communications device that had the potential to vastly improve people’s personal and economic lives?” This question had to be answered before Ibrahim’s company could raise the investor capital to buy up licenses across Africa. The big money was in owning the licenses.

To make a long story short, Ibrahim observed that workers, no matter how impoverished, found a way to scrape the money together to enjoy a few beers on Friday nights with friends. From this he concluded that they would be able to put the money together for a mobile phone. He then designed a new business model that would result in aggressive growth in rural areas.

Here’s how the business model that would support his growth strategy looked. First, Celtel would stick with older and cheaper telecom technology that lagged those being used in developed countries by a generation or two. Second, there would be no service contracts or subscribers. Without subscribers there is obviously no need for an expensive billing system to track usage, tally charges, and send out monthly statements. Instead users would simply purchase prepaid calling cards and keep track of their own minutes. This helped to further drive down the company’s operating costs.

There would also be no free handsets given out. Ibrahim assumed that while a handset purchase might be a financial stretch for an individual if the entire family pitched in it became an affordable  investment that benefited all the members in the same way that a shared landline benefited American families in the 1950s to ’80s.

On top of all this, the fact that the company was paid up front by its customers while enjoying 30 to 60 days of trade credit with its suppliers created a cashfloat which could be used to buy additional licenses and aggressively grow the business.

Dr. Ibrahim’s assumptions proved correct and the company grew rapidly as it snapped up operating licenses across sub-Saharan Africa. He then sold Celtel in 2005 for $3.4 billion and shifted his focus to running the Mo Ibrahim Foundation which encourages better governance in Africa.

This is one of those inspirational stories showing how entrepreneurial creativity and business modeling solves problems.