Carlos Slim: An Eye for Opportunities

To kick off the first ever Annual Carlos Slim Week, here’s a short insight into the man.

After Carlos Slim had pretty much acquired everything that he could in Mexico without triggering a revolution by the populace, he had to start looking outside of the country for investment opportunities. On a trip to New York he went shopping at Saks Fifth Avenue the up-scale department store. While most shoppers would have been absorbed by the merchandise and what to buy, Carlos Slim’s mind was on bigger matters as is the case typically with tycoons. He looked up the company’s share price on the NYSE. Then he estimated the square footage of the store and asked a friend in real estate what the per sq. ft. price was for retail space in the area. These two numbers multiplied then gave him the market value of the Saks real estate. 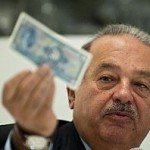 To his surprise he discovered that the real estate value of the store was far greater than the company’s total worth on the stock market. So Carlos quickly started placing orders to buy up shares. This is equivalent to, for example, discovering that you can buy dollar bills for 25 cents.  In short order, Slim owned 25 million shares or 17% of Saks.

This type of opportunity can only happen with publicly-listed companies but does so with regularity. However, it’s not something you will see with private companies. With the latter most owners tend to have a clear grasp of the company’s maximum value when it comes time to sell it.

The takeaway here is that tycoons are always on the lookout for opportunities. Their internal radar is continuously doing a 360 degree scan of the horizon for money-making opportunities. They will even jump on opportunities outside of their core business area when it makes sense to do so.