How Did Carlos Slim Become the World’s Richest Man?

Life is like a snowball. The important thing is finding wet snow and a really long hill. — Warren Buffett

The answer to the question of how Carlos Slim Helu became so wealthy can be traced in large measure back to his childhood. Carlos was fortunate enough to receive an early start in his business training from his businessman father. There’s a school of thought that kids who grow up in a family where dad (or mom) is an entrepreneur are far more likely to become entrepreneurs themselves. I participated in an extended debate over this years ago with a couple of colleagues. At first I resisted the proposition but came to accept it over time. I know a well-known entrepreneur who explained how he got the entrepreneurial bug early on this way. One evening, when he was about 10 years old, he sat silently in the living room listening to his dad negotiate a bank loan over the telephone. That’s when it hit him that he wanted to be a businessman too. Most of my successful entrepreneurial associates had entrepreneur fathers.

There’s no better advantage than growing up with a successful entrepreneurial parent. It’s as if one learns valuable lessons and the right attitudes from them by osmosis. 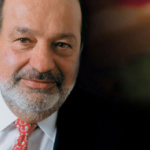 With Carlos Slim, his business education started very early. Although he was born in Mexico, in 1940, his parents were immigrants from Lebanon. After settling in their new home, Carlos’s dad opened a dry goods retail operation and ran it successfully for a few years. Later on started he started investing in other small businesses and real estate opportunities to diversify his holdings. Carlos got to watch this activity and listen to his dad talk about it at family meal times.

However, there’s more to the tale. Carlos and his five siblings were all taught early on by their father to invest and manage their money with formal book-keeping. Specifically, he taught them how to use accounting ledgers to maintain records of their income and expenditures. According to legend, Carlos Slim really took to this habit and quickly showed a gift for numbers. In grade school he was tracking his school yard trades in marbles and baseball cards to ensure that he was operating at a profit.

Well, when I was very young, maybe 12 years, I began to make investments. Yes, maybe a little before. First I opened a check account. I looked at the — I looked that there was nothing of yield. So I bought some bonds. It was a bond. When I bought this bond it was duplicated in 10 years. I think it was 10 percent.

Then I understand compound interests in those times and then I think at 14 or something like that or 13, I bought stocks. I follow investment, but also my father, he began to make — we have order with the money. In Mexico, we say you have money for the week to spend. (Larry Ling Interview)

I’m in agreement that there’s no better preparation for a successful entrepreneurial career than growing up with an entrepreneurial parent. However, there’s still hope for those who weren’t raised in this type of family. The workarounds are education and jumping in early to gain experience–eve if it’s just a summer lemonade stand. Having an extroverted personality is also an advantage because the founder typically has to be the sparkplug that triggers the establishing sales.

Carlos Slim was fortunate enough to not only learn the basics of success of business from his family, but he also developed positive mental associations* around money and making a profit. So it should be no surprise that he decided to throw himself fully into the game of building a highly diversified business empire. Later on, he was fortunate enough to be in the right place at the right time to really propel himself forward.

Stay tuned for a few more posts on Carlos Slim.

* One of the most harmful ways to grow up is by having parents who constantly repeat the old lie that the rich are all crooks who made their money dishonestly. It poisons one’s attitude toward money and wealth.