Brinkmanship: the art or practice of pushing a dangerous situation or confrontation to the limit of safety especially to force a desired outcome.

One of the stories that best exemplifies how tycoons can think differently is about Fred Smith realizing that FedEx had run out of cash and would have to stop flying. Co-founder, Roger Frock, tells the story this way in his history of the company Changing How The World Does Business. On page 101, Frock writes:

By mid-July our funds were so meager that on Friday we were down to about $5,000 in the checking account, while we needed $24,000 for the jet fuel payment… When I arrived back in Memphis on Monday morning, much to my surprise, the bank balance stood at nearly $32,000. I asked Fred where the funds had come from, and he responded, “The meeting with the General Dynamics board was a bust and I knew we needed money for Monday, so I took a plane to Las Vegas and won $27,000.” I said, “You mean you took our last $5,000– how could you do that?” He shrugged his shoulders and said, “What difference does it make? Without the funds for the fuel companies, we couldn’t have flown anyway.” Fred’s luck held again. It was not much, but it came at a critical time and kept us in business for another week.” 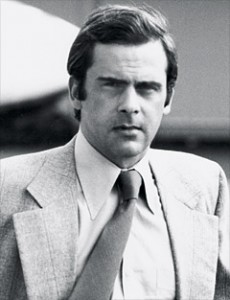 Smith subsequently confirmed this as fact in a PBS program about the company.  He said he was at the airport and stood there wondering what to do. Looking up at the board with all the departing flights he noticed one for Las Vegas and decided to go there. He then won the needed cash playing Black Jack. By Monday, to the shock of other higher ups in the company, FedEx had $32,000 in the bank, which was just enough to cover the  fuel for their planes and to continue operating a few more days.

Soon afterward the  company was able to attract a significant amount of investor capital and in 1976 made its first profit.

There are a number similar stories in the Guerrilla Startups Guide about founders resorting to brinkmanship when faced with ruin. One is about an entrepreneur who upon finding himself in similar circumstances after a disastrous first year used the last of his funds to throw a lavish party to celebrate his successful year. Suddenly everyone wanted to be his client.

Brinkmanship doesn’t work every time. However, it can pay off occasionally when the only other option is to declare defeat and surrender.

Posted in How to Buy a Business | Tagged brinkmanship, FedEx, Fred Smith

One Response to Fred Smith and the FedEx Cash Crisis