Well this episode was a bit of a roller coaster ride with some serious plummets that could have killed the deal. It also has some interesting deal-making aspects.

The Artistic Stitch Sports Complex is an odd collection of businesses all operating under one roof in Queens. The two owners, Sal and Nic, are friends who have been in business 18 years to date. Their bread and butter businesses are embroidery, silk screening, (and sign making*). However, they were able to get a deal on an old 28K sq. ft. warehouse a while back which had far more room than they actually needed. So to justify taking over the entire building they came up with some pretty weak secondary businesses.  These include a restaurant and a sports complex where people can play basketball or get in some batting practice. These add-on businesses appear to take up 80%, if not 90%, of the floor space, with the profitable ones “shoved into a corner,” as Marcus put it. Walking around the place, he described it as the “world’s weirdest mini-mall.”

The business has sunk $1.5 million into the renovations needed to add the new divisions but has no idea how it will ever pay it off the remaining $660K. This money is owed to the contractors who did the work as no bank would touch the concept. The restaurant and sports complex are big money losers that the embroidery, silk screening, and sign divisions have to carry. The three money makers together generate $1.3 million in sales and $900K in gross profit. That’s a superb gross margin of 75%. However, the money losers keep it in the red and foil any plans to pay off the contractors.

Marcus wonders why they don’t just focus in on these businesses.

The monthly rent on the building is $17K.

As I have pointed out before when reviewing The Profit episodes, a lot of businesses will have a very profitable division carrying an unprofitable one. The primary reason for this is that it’s difficult for owners immersed in the daily operations to step back and look at things objectively. However, for outsiders it’s easy to tell which is which by looking at the books. Like a good tycoon Marcus typically dumps the unprofitable operations and throws his resources into building up the profitable ones. In this case, he realizes quickly that the restaurant and sports complex need to go and that the best way to fill the resultant void is by expanding the money makers.

Despite all these problems Marcus still thinks it’s a go when he sits down with Sal and Nic to talk turkey. During the course of this conversation he uncovers the fact that there is a secret real estate play beneath the operating businesses. Sal has an option to buy the warehouse for $2.5 million in five years and estimates its current value is already at $4 to $5 million. Marcus is not pleased about not having been informed about this and concludes that possibly all the businesses are there simply to help Sal and Nic last out the five years until they can flip the real estate. (This was actually quite clever of them.)

However, for a while it looked as if this might kill the deal. Then as any good deal-maker would, Marcus realized that the proceeds from any such sale could be used to guarantee payback of his investment. There aren’t many deals where you can be assured of recovering your principal. This is one of them.

When Marcus’s spidey-sense tells him to go out on a sales call with Nic, the company’s only salesman, he discovers that the latter lacks even the most basic of selling skills despite pulling in $100K per year in salary (not commissions). This looked like another potential deal-killer since Nic is also a 50/50 partner in the business. If someone owns that much of the business and is receiving a huge salary while not really performing, you have to think twice about getting involved as an investor or lender.

Despite all these problems and a number of further revelations that the Sal was not being forthcoming about all of the ugly facts, Marcus still decided to make an offer. Going in Sal and Nic were were 50/50 partners as mentioned. Marcus then offered to sink in $660K to pay off the debts for half the company. They finally settled on this breakdown:

Fabio is a key player on the profitable side of the business who Marcus felt deserved some equity after many years with the company.

Marcus also changed Nic’s compensation from a $100K salary to 100% commission. Nic didn’t bat an eyelash over this. I’m not sure he appreciates the ramifications of this change. Good luck to him.

And as noted above, Marcus used the future real estate sale to create something akin to a venture capitalist’s liquidation preference. This is how these works. If a VC firm invests $1 million into a company for 50% then it’s is deemed have a “post-money valuation” of $2 million. If the company is then sold down the road for, say, $20 million the VC’s liquidation preference may call for him to be paid 10X his original investment. That’s a 10X liquidation preference. Whatever is then left over is split amongst the remaining shareholders. (This is one of the reasons why everyone hates VCs.) In the episode it looked as if Marcus was settling for a very reasonable 1X preference. 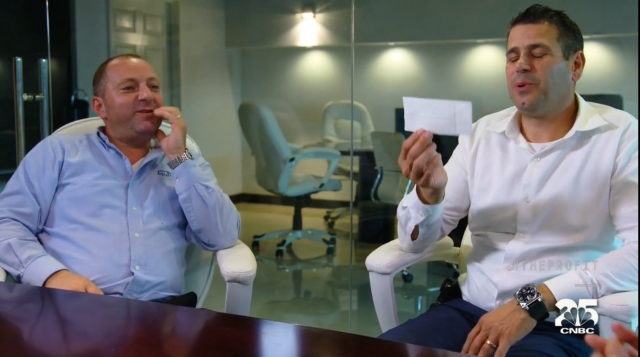 Nic and Sal: We have a deal!

The growth strategy is standard Marcus (and tycoon) business building strategy. Jettison the money losers and plough resources into the money makers. He rebranded the business into Queens Vibe because the area is seen as being a hip and trendy place to shop and live. (I’m pure West Coast so don’t quote me on this, okay?) He also converted the sports complex into retail space with silk screening and embroidery machines that allow anyone to create their own designs.

This did not turn out to be the drama queen episode that I was expecting to follow last week’s Courage b episode. Maybe next week we will see some crazy stuff?

This was a strong episode in terms of business lessons.

* It was never made clear as to how profitable the sign business really is. Sometimes Marcus included it with the money-makers and sometimes he doesn’t. The problem here is in the editing. It’s tough to trim a week’s worth of taping down to 42 minutes.

What could you do if you had Marcus’s business know-how?

5 Responses to The Profit: Marcus Lemonis and Artistic Stitch