Okay, let’s take a look at this one. We finally got the train wreck we have all been waiting for. I know you guys and gals love them.

Swanson’s Fish Market is a 41 year old family business located in Fairfield, CT. It’s currently run by the founder’s son Gary Jr. His wife Sue is also involved to some debatable degree. Their daughter Larissa recently quit her job to come work as the book-keeper for business.

On July the 4th, 2009 the building that housed the original store burned down and all was lost including a full year of operations and income. Today the business is $900K in debt and struggling to become profitable.

Despite the huge debt Gary Jr. initially paints a bright picture when asked about the store’s financial performance. Monthly sales are over $150K. The fresh seafood has a decent gross margin of 30% while the soups and other prepared meals have a strong margin of 60%. Marcus immediately starts seeing $ signs as he thinks about expanding the latter. On top of that the new building makes additional money by renting out two storefronts to a cafe and burger joint. This income more than covers the mortgage payment.

Sweet! Sure it’s a dull business but Marcus has the Midas Touch and can turn it into another money maker.

Then things start to quickly unravel as we discover that Gary Jr.’s forte is not accounting.

I won’t get into the details but let’s just say that the business is a money losing disaster. It’s so bad that the employees are not only sometimes asked to wait an extra couple of weeks for their pay checks, but at times have to each pitch in a couple of hundred bucks to help pay for inventory.

Now that is the sign a very badly-managed business.

Larissa meanwhile is commuting an hour each way every day to help her parents try to save the business. She appears to be a good book-keeper and is the one who reached out to Marcus for help. Her numbers paint a bleak picture although there’s a mystery to where the money that does come in goes since Gary Jr and Sue’s personal financial affairs are also in shambles. 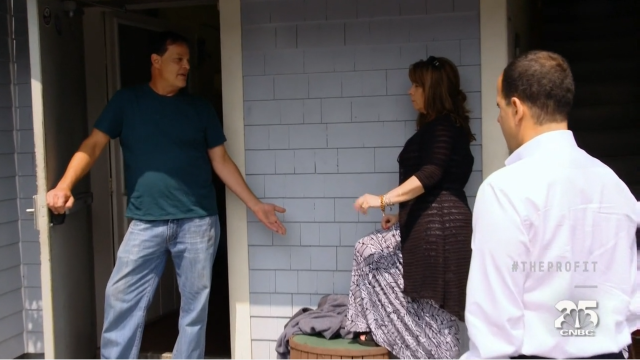 Showdown: Gary Jr. and Sue duke it out over what goes first: her BMW or his boat.

Initially Marcus works on a growth strategy centered around expanding the soup and prepared seafood meals. He envisages remodeling the store to make more efficient use of the retail space. This is all standard Marcus Lemonis growth strategy stuff.  Focus on the high margin lines and squeeze the maximum possible sales out of every sq. ft. of retail space.

It’s when Marcus learns that one of the tenants, the Black Rock Cafe, has not only not stopped making payments but is five (5) months in arrears that the magnitude of the problems really hits home. Five months?!? But Marcus being a tycoon type comes up with a brilliant solution. Pay close attention here. Why not save the tenant by having them convert their cafe into a seafood restaurant that serves-wait for it!–Swanson’s supplied product? Then customers can buy fresh seafood and soups to take home or have a meal there. One of the two cafe partners agrees to this while the other appears to ride off into the sunset.

As the show progresses there’s a steady stream of bad news with the worst being that the money-making property is now actually in foreclosure. Marcus also learns that Sue, who rarely shows up for work, is simply not going to trade in her company leased (I assume) BMW for a cheaper car despite the economic hardships of both business and family. Then on top of all that it turns out that Gary Jr. has a boat too. Both he and Sue are, to use the old phrase, like bull-dogs with a pork chop when it comes to their toys. This just infuriates Marcus, as it should. Finally the word leaks out that Gary Jr. and Sue are having their house remodeled in the midst of this financial meltdown. Meanwhile their employees are being asked to wait an extra couple of weeks for their pay and to pitch in for another load of fish.

I’ll just add that insurance salesmen in Fairfield must run and hide whenever they see Gary Jr. a coming. He’s had fires at both his store and warehouse. On top of that his boat got swamped in a storm and insurance has paid for all three losses.

Before learning about the foreclosure and boat, Marcus offers to buy the building for $1 million which will go into an escrow account to ensure that it’s not used to pay off cars and boats. The money will allow Swanson’s to pay off all its debts and still have some working capital left over. By owning the property Marcus protects his own money. The deal is finally accepted when Gary Jr. gets an option to buy the property back at some point.

The whole thing then ends with a rather violent argument. At that point Marcus is suspecting that he’s been deliberately deceived and decides to just walk out.

You can’t blame him.

-Always keep this in mind: just because someone happens to own a business does not mean that they know how to run a business. This is especially true of the small stuff with $500K in annual sales or less. These “businesses” are normally teetering on the edge of disaster but the owners are too tight-fisted to invest any money into fixing the problems.

-If you are planning to start a business one of the first things you should do is hire a book-keeper to come in and set up your books for you. Then commit to keeping your records up to date. This usually means an hour two on Fridays.

-Don’t try to treat a man like Marcus as if he just fell off the back of a turnip truck especially if the cameras are rolling. He’s going to eventually see what’s really going on and so will Mr. & Mrs. America.

-Sometimes you will come across families where the child is the parent and the parents are the children. Larissa struck me as the only adult in this family. Hopefully she can move onto a less stressful and better-paying  job soon. Her parents need to learn how to fix their own mess.

I didn’t really see all that much upside potential with Swanson’s. Seafood is a commodity which makes it difficult to brand. When you then add in all the nasty surprises that trickled out, it’s no wonder Marcus chose to walk.

By the way, is $1 million the biggest offer Marcus has ever made? I can’t recall although I know  he has made others which came close.

Does anyone know if Swanson’s is still in business considering the bank foreclosed on the property?

58 Responses to The Profit: Marcus Lemonis and Swanson’s Fish Market