This was a surprisingly drama-free episode. It’s also the stuff of a typical Harvard Business School case study. In other words, it’s not a particularly interesting business but some good lessons do await us.

The Unique Salon & Spa chain was launched 16 years ago and has four locations on Long Island with sales just north of $4.2 million. Current owner Carolyn DeVito had an acrimonious split with her founding business partner, Joe Secreti, two years ago but has been unable to make her stores profitable due to a combination of debt and bad credit. When Marcus walks in the place is a mess. Counters have big chips knocked out of them. Hair-styling chairs are broken and taped together. There are nasty looking stains on the walls. One gets the impression that a cleaning crew only swings by once a year, if at all. Moreover, Marcus notices that the front of the main store is jammed with cheap jewellery and clothes and describes it as a flea market.

In contrast, Joe is rolling in dough with 22 locations. It sounds as if he built his chain up from scratch after parting ways with Carolyn. (Correct me if I am wrong here.)

Today the business has a crushing level of debt estimated to be $1.7 million. Apparently Carolyn agreed to assume it all in return for getting the four stores. About 70% of the $4.2 million in revenue comes from hair coloring. Marcus’s eyes turn into dollar signs as he starts digging into how to expand this area.

As always, Marcus zeros in like a shark on the stuff with the highest potential margins. Can it be tweaked to make even more money? In hair salons it’s invariably the hair care products that have the best margins. The same volume of shampoo you buy at your grocery store for $4.99 sells for at least 4x times that in a salon. (I used to be an investor in a small a manufacturer of skin and hair care products years ago.)

The chain’s current house brand has healthy margins according to Carolyn but has never been offered to other salons. Marcus lights up at this. 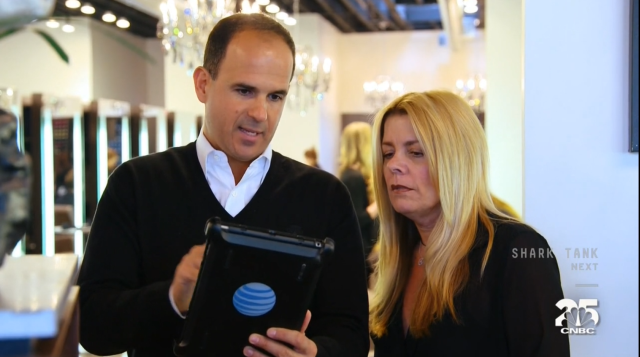 Marcus shows Carolyn some of the new whizzbang tech she’ll be using to run the salons.

The company has a whopping 120 employees. If we divide 120 into $4.2 million we arrive at per employee sales of only $35,000, which is not a good average. I googled the data for the industry which turns out to be about $45K per employee. (Sales per employee is one quickie yard stick you can use to see how a company is performing against industry averages.)

Now lets take a look at the org chart. Carolyn as owner has her office at the flagship store where the episode was shot. Each of the four stores has its own manager. The one manager who was asked what her job entailed was at a loss for words. The four store managers are supposed to report to a general manager whose office is in the basement of the main store. Sometimes they get frustrated and drive over to talk to Carolyn directly. The group manager is a woman named Susan. Marcus wasn’t convinced that a business that size needed a managerial layer between Carolyn and the store managers. Your humble correspondent agreed. When a group pf stylists pulled Marcus outside and told him that they had no idea what Susan did at the company during her four-day-work-weeks, it became clear that something had to change.

Long story short, when Susan is called at home a bit later she simply hangs up on Marcus and Carolyn and is never heard from again. My take on this is that the job wasn’t really that important to her. If you need your paycheck, you will fight for it. If only it were this easy to get rid of people all the time.

So by now you can probably guessed Marcus’s standard growth strategy. He’s going to use his investment to renovate the flagship store in order to attract a clientele that will be willing to pay more. This money includes investing in the creation of a higher margin branded hair care line which he will have a 51% stake in. After initially looking at calling it Unique, they all settle on “Erika Cole by Raquel.” (From what I can recall at least two if not all three names are those of Carolyn’s kids.) He will also maximize sales per sq. ft. by adding more chairs in the salon section and expanding the lucrative hair coloring menu. The jewellery and clothes will most likely be blown out in a fire sale.

-A business needs a proper accounting system in order to be managed effectively. Carolyn’s didn’t seem too bad because she was able to quickly supply accurate numbers, unlike last week’s Swanson Seafood.

-A business also needs proper systems in place to prosper. Things were a disaster under Susan who clearly wasn’t up the job and didn’t seem motivated to improve.

-Marcus admitted to Carolyn that he didn’t see the salons as a scalable business that could be taken across the country. As someone put it, go to any street corner and you will find two or three hair salons.

-It doesn’t cost much to hire both a company like my old one to design a new shampoo and conditioner line and another one to create a logo and slick packaging. That’s the easy part. The hard part is getting a new line out into salons. It’s a tough slog even with a dedicated salesperson fully committed to it. I saw no such person at Unique. Now you know why Marcus organized the Tony Soprano style “seat down” between Carolyn and Joe who has 22 stores.

-Personally, I would have passed on the new hair care line as the market is saturated with them. Every hair salon owner has a dream of one day launching their own hair care line. Few manage to pull it off because it’s an entirely different business calling for strong product sales and marketing skills. I predict that within a year if not sooner Marcus will be asking himself, “What was I thinking?!”

It wasn’t an exciting episode but it did serve to reinforce the main elements of the Marcus Lemonis growth strategy.

6 Responses to The Profit: Marcus Lemonis and Unique Salon & Spa