This is another drama-mama free episode which offers a good look at a stalled out small business. Unfortunately it felt rushed and would have benefited from a delay in airing so that we could see the actual results of Marcus’s growth strategy. However, with the season coming to an end shortly it had to be aired this week. (Was this the season finale?)

The company is a manufacturer of wooden sports novelty products. It’s located in Coopersburg, PA which is Amish country. Scott the owner inherited the company in 1991 from his father and shortly after secured the rights to produce mini-baseball bats for MLB teams. Before that the company had been in a sunset industry manufacturing wooden handles for tools. The bats have been the bread and butter line for the company ever since. Revenues peaked at $4.38 million in 2008 when a major player, Louiseville Slugger, stepped into the market and cut Coopersburg’s sales in half.

When Marcus is called in sales are slipping further and the company is floundering under about $1 million in debt and A/P (accounts payable).

The product line consists of mini baseball bats which come in your favorite team’s colors and other sports memorabilia. One of the things that attracted Marcus to the business is Scott’s claims that the bats are sold in all thirty MLB stadiums. This turns out to no longer be the case.

Scott runs the company but now has help from his two mid-twentyish kids Jackie and Ben. Both of them take their jobs seriously and actually appear to want to be there to help their dad. With a lot of family businesses the kids want nothing to do with their parent’s business, so Scott is pretty fortunate in that respect.

Scott’s big problem is a fear of trying new things so that the company can move away from its over-reliance on a product with a very limited market and Goliath sized competitor.

This is the big train wreck in terms of the 3Ps framework. The warehouse/production facility is a disaster. Marcus reports that it may well be the worst he has ever seen. I concurred. There’s no inventory system. There’s also no order tracking system. All of this results in orders being botched. Jackie reports that she is 1200 boxes short for one shipment waiting to go out.

You can’t run a business this way.

The company has about 700k in debt and another $270K in A/P of which a third is way past due. The cashflow from $2 million in sales is insufficient to cover the loan payments. All the alarms should be blaring at this point.

Despite all this, Marcus puts in an offer because he believes that the mini bats are sold by all thirty MLB teams. He sees this as a base from which to expand. So he offers $630K to build a new facility, pay off the A/P in full, and put into place inventory and order tracking systems in return for 50% of the company. When Scott balks at this, Marcus quickly retreats to $630K for only 30%, full financial control, and a 3% royalty forever. Scott jumps on the second offer.

I think chasing Louiseville Slugger is like barking up a dead horse’s ass. – Marcus Lemonis

The new growth strategy can be summarized as expand the product line to reduce dependence on a product with very limited growth potential. I am referring to the miniature bats sold to MLB teams. The seasonality in the business which has forced Scott to pour all of his life’s savings into it to keep it afloat can also be eliminated with new products being sold to new customers. Marcus wants new products for other sports, retail chains (e.g., Bass Pro Shops), and the collegiate market. He then gets the team brain-storming new lines such as the bar stools with baseball bats for legs. 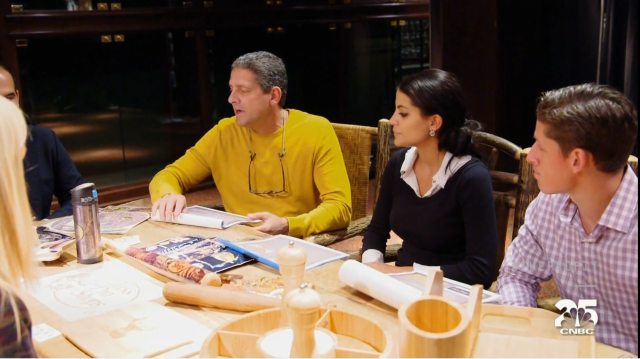 Okay, here are my big lessons from the episode.

-Don’t be ever dependent on just one customer! If all of your sales go to a single customer, you don’t really have a business that anyone would buy unless there were ironclad contracts giving you a monopoly for the next 100 years. As a business broker I used the old rule of thumb: if more than 20% of sales come from a single customer that business is vulnerable. If the customer ups and leaves it could sink the company. I would then talk the owner into postponing the sale so that we could diversify the customer base.

– Get rid of the seasonality. Coopersburg Sports has a dead last quarter each year because it’s totally reliant on baseball products. This forces the company to lay off employees before XMAS. It’s also caused Scott to sink his entire life’s savings into the business to keep it afloat. I think the figure was $800K. Having a dead season is a sign of weak management. Have you ever seen retail locations that are bike shops during the spring and summer and ski shops during the fall and winter? That’s an example of creatively solving the seasonality problem.

– If you’re not growing, you’re dying. Scott appears to have been standing still since the traumatic 50% drop in sales of 2008. That’s why things were just getting worse and worse for him.

Since we were given so few details about a business that is quite complex to run, as are all manufacturers, I will stop here.

Hopefully the family will look into the Theory of Constraints which is about continuously making incremental improvements in the production process. The concept was first introduced in the business novel The Goal by Israeli physicist Eli Goldratt. (There’s also a one hour movie about it.)

By accepting that the bats are basically now a sunset industry, Scott can move on and build a very successful company.

Good luck to him, Jackie, and Ben. They make a good team.

P.S.You have to cheer for a company that has dogs wandering around.

5 Responses to The Profit: Marcus Lemonis and Coopersburg Sports