The Profit is back. Finally!

The master of small business growth strategies, Marcus Lemonis, has returned for a third season with a strong opening episode. SJC Custom Drums of Southbridge, MA was launched in 2000 by brothers Scott and Mike to design and build high quality drum kits. Over the years the company has provided kits to a number of professional bands including Green Day and Lady Gaga. The “s” in SJC stands for Scott who was the designer and technical genius behind the company’s products. Unfortunately, the brothers had some differences early on which led to very bad blood between them and culminated in Mike finally making an offer to buy Scott out of his 50% equity stake. Scott accepted the offer 5 years ago and has not been on speakers with his brother since.

Since then SJC has sputtered along under the leadership of Mike and an employee, Chris, who serves as both CFO and COO. Last year the company lost $200K on sales of one million. When Marcus arrived he found a very disorganized business that was frequently taking six to seven months to deliver a custom drum kit. This is an outrageously long period for a customer to have to wait for an item of this type. As Marcus pointed out, a customer can expect to wait that long for a yacht or a Rolls-Royce, but not a drum kit–not even a $7K custom one.

While doing his initial walk through at the factory, Marcus discovered that a production system was non-existent. Moreover, parts were strewn all over thereby forcing the assemblers to waste a lot of time looking for them. The inventory control system was also nonexistent.

This inability to fill orders quickly in order to get paid contributed to a steadily deteriorating financial situation. Marcus was shocked to hear that the company had a gross margin in the 17% to 20% range rather than the typical 40% for a manufacturer.

The day Marcus arrived at SJC the company had completely run out of cash. 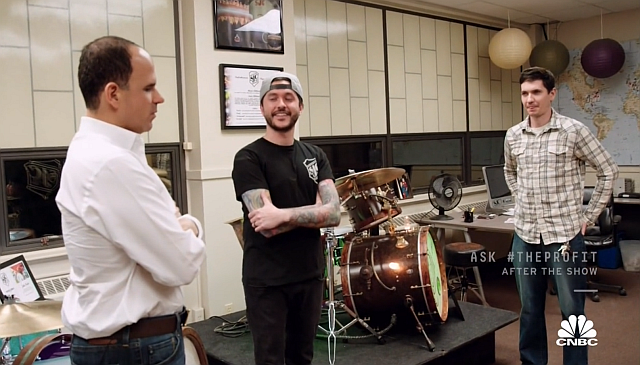 Marcus and brothers Mike and Scott (L to R)

The Buy Out Valuation Mystery

The price tag for Mike buying Scott demanded some explanation as the number was out of whack.

Hmmm….that’s a pretty generous buy-out considering what the company may have been worth five years ago.

Let’s try to reverse engineer this valuation in a very crude fashion to try to figure out how they arrived at that price tag. Since all we know is that it took 15 years to reach one million, let’s assume that the growth was steady from year to year. This then allows us to assume that when Scott left two thirds of the way through (at year 10 of 15), the company had sales of two thirds of one million or $666K.

Let’s be extremely optimistic and generous and assume that back then the company had a 40% gross margin.

Now let’s round that down to $50K and use that as the ODCF (Owner’s Discretionary Cashflow) which is our basis for arriving at a valuation. Typically small businesses sell at a multiple of 1X to 2X ODCF. However, since this is a manufacturing concern of sorts let’s be generous once more and use both a 3X and 4X multiple.

If the company was actually worth $200K five years ago and Mike agreed to pay out $533K plus interest for just 50% of it, then the company was valued by the brothers at 2 X $533K or $1,000,066. That’s five times more than what the most wide-eyed valuation would have arrived at.

Because I have been forced to pull numbers out of the air here, I have been extraordinarily generous with the gross profit and selling multiple estimates. Even then the $533K price tag for half the business makes no sense.

Maybe I am missing something here as I’m still waking up as I write this.

The only explanation I can come up with for the valuation is Mike trying to make it up to Scott because things ended badly between them.

Now let’s get back to the episode after this brief detour,

Marcus offered $400K for a 33% stake in the company. $300,000 would go towards paying off bills and $100,000 into working capital. He also wanted Mike to split his share with Chris so that Marcus, Mike, and Chris would each own 33%. This was done before Scott came into the picture. If Scott decides to stay involved they will have to restructure the ownership again. Marcus might go with a 25/25/25/25 structure or ask the three to split the 67% three ways. As it stands right now Scott is just a consultant to the company.

Scott, Mike, and Chris complement one another very well. Scott is obviously a wizard at designing drum kits and solving technical issues such as how to reduce production costs. Mike, now that he has been provided with growth systems to follow by Marcus, has what it takes to be a good president and salesman. Chris, who I believe has an MBA, is a numbers guy and clearly suited for the CFO/COO roles. He’s also good at sales. I should add that Scott with his passion for the products has the potential to be an asset in sales calls as well if he wants to get involved again.

From what we can tell from the episode there are no problem employees among the assembly crew.

Marcus’s growth plan revolves around selling drum kits at three different price points. This will allow SJC to “cover the entire universe,” as he put it. The three models will be:

Goodest  $6000 and up depending on the specifics of the customization.

All three price points will provide SJC with the required 40% gross margin.

Marcus will also have the Mike and Chris call on major retailers who specialize in musical instruments as we saw at the end of the episode.

On top of that, Marcus has completely redesigned the assembly floor plan for maximum efficiency with everything being organized along a ten step production process.

Marcus said at one point when the brothers weren’t talking that he wasn’t Oprah, but he actually is when you consider all the people he’s brought together. At least half of the episodes so far have involved Marcus using his magic touch to heal relationships between family members and friends.

Here’s wishing the guys all the best.

2 Responses to The Profit: Marcus Lemonis and SJC Custom Drums