In this week’s episode our hero Marcus travels to Staten Island to visit Standard Burger after almost two years of pleading by Sammy who is one of the owners. There he finds a single location burger joint that’s serving mediocre food and losing $5K to $6K per month.

Too many cooks spoil the broth.

The biggest problem holding back Standard Burger becomes evident immediately. The business simply has too many owners none of whom have restaurant experience. All of them have day jobs elsewhere and behave like absentee landlords. To Marcus’s shock no one has responsibility for the day-to-day operations of the business. When he asks an employee who she’d call in the event of a fire, she doesn’t have an answer.

The four owners are Sammy who started the place with his brother Fuji and contacted Marcus, the two Joes, and Todd. Sammy personally funded the opening with $250K in savings and was motivated in large measure by a desire to create a job for his chef brother Fuji who left after disputes with Todd. Whenever these guys get together it’s nothing but “mad squabbles” to quote a favorite movie of mine. Todd comes across as being paranoid about inventory shrinkage and favors having surveillance cameras everywhere.

The equity breakdown is as follows:

Marcus then requests a meeting with Fuji to hear his side of the story about why he left. Fuji is the only member of the group who knows how to cook for a restaurant. 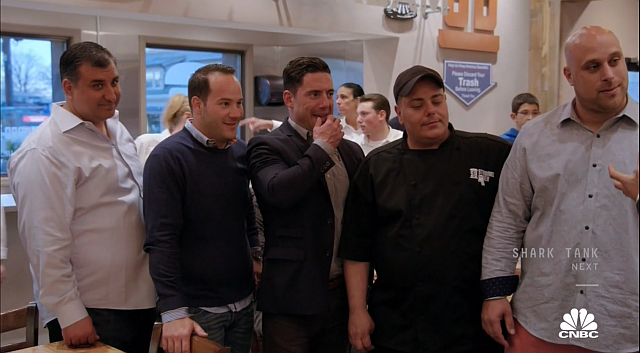 The process is a disaster. As Marcus put it, he has seen controlled chaos but Standard Burger is simply the chaos part without any control. At one point melting snow floods the interior because accumulated junk is blocking the site’s drainage system.

Despite all the big flashing warning signs, Marcus decides to present an offer to the boys. He offers $130K in return for 30% of the business. However, he also wants each of the four to pitch in another $15K each. This would put $190K into the pot. On top of all that Sammy insists that his brother Fuji be granted 10%. The deal is accepted.

I have never seen a deal done this way. Normally you would ask investors to pitch in on a pro rata basis. Instead Marcus got the guy with just 10% to cut the same check as the ones with 22.5%.

The new equity distribution is:

The growth strategy for Standard Burger is your standard Marcus Lemonis one.  He modifies the offerings in order to generate more sales of high margin items such as fries, baked potatoes, shakes, and ice cream. These have margins in the 80 to 85% range. These products are expected to boost per customer sales to $15 from $10.

Once the deal is done, Marcus has second thoughts about the existing branding and floor plan and decides to sink another $400K grand into a complete redo. The final result is a spectacular improvement over what preceded it.

He also gets rid of the obnoxious surveillance cams.

By the end of the episode everything is looking copacetic.

You can’t have a business run by a committee. It never works out. Someone has to have the “The Buck Stops Here” sign on their desk. The others have to resign themselves to being silent partners.

As a general rule, don’t go into business with friends as partners or employees. It also rarely works out and more often than not drives a wedge between people that can kill even childhood friendships.

Finally, Marcus doesn’t have to be an expert at everything in order to be highly successful. What he does need though is a good team of specialists to rely on. For example, the same contractor who remodeled Tonnie’s Cupcakes last week appears to have also worked on Standard Burger.

I can’t help but think that considering all the money he sank into the completely redoing the concept he could have just started his own from scratch and kept 100% of the equity. But then there wouldn’t a show, would there?

5 Responses to The Profit: Marcus Lemonis and Standard Burger