Marcus develops a growth strategy for a chain of blue jean retailers.

It’s nice to see Marcus on the best coast for a change. This was an odd episode which I attribute to the editing team leaving important scenes on the cutting room floor.

The owner of Blues Jean Bar, Lady Fuller (“Lady” is her actual first name), founded the chain of blue jean stores. At one point there were thirteen stores stretching from the Bay Area to Boston but a lack of profitability forced her to shutter ten of them. Now only three remain in San Francisco, Dallas, and Chicago.

You can’t touch the jeans without us. – Lady Fuller

Well then, I don’t wanna buy them. – Marcus

The original gimmick was to sell only jeans in a store designed to look like a New Orleans blues bar. This meant having an actual bar in the store minus the booze of course. The merchandise was stored on shelves behind the bar. If you wanted to try on a pair you’d have to tell the bartender your size and style preference and she would hand the right pair to you. You could then try them on in one of the changing rooms.

You’d never catch me in that place. Like most men I hate shopping for clothes. If I need something cheap like a pair of blue jeans versus a suit, I want to be left alone. I don’t want to have to ask a bartender to hand me a pair nor do I want a sales-clerk waiting outside the changing room to “see how they fit.”

The sales process is just too intrusive for my tastes.

Marcus also hated the bar which takes up a huge amount of valuable floor space.  Due to the bad layout the stores only have a 50% margin while the standard for this type of retailer is well over 60%.

Marcus offers $800K for 50% of the company. Lady counteroffers with $1m for 40%. Five minutes later Marcus throws in another $100K for the 50%. No creative deal-making this week. Bummer.

Marcus and Lady then have an ongoing battle over eliminating the bars from the new design. To her the bar is the soul of the store. 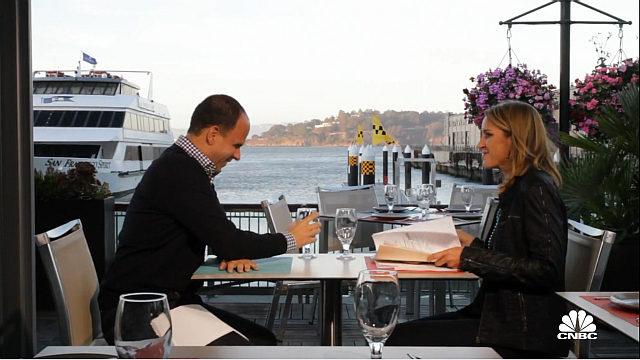 Marcus sees the new revamped concept as having potential to become a national brand.  To lay the groundwork he does the following:

-changes the name to Denim & Soul,

-dumps the bar in favor of more retail footage,

-reduces the floor space devoted to jeans from 70% to 50% and fills it with higher margin accessories such as t-shirts and blouses. This will push the margin up from 50% to 62%.

For the first time in a long time I was left unimpressed with the redesign. It just looked like a generic clothing retailer afterwards. I will also add that considering just how badly the three stores were being run the company does not appear to have the core team needed to go national.

Maybe it’s just hard to get excited over a blue jean retailer?

4 Responses to The Profit: Marcus Lemonis and Blues Jean Bar