The Profit: Marcus and Wick’ed Candles

The Burbank-based company was launched five years ago by spouses Mark and Sam(antha) Biren who own it 50/50.  The company has never made a profit.

Marcus is met with resistance when he informs Mark and Sam that despite the company being five years old it’s still a startup due to its weak financial position.  Sales have been declining, it’s losing money, it owes money to a credit card company and an investor, and there’s no working capital. Sam’s day job is the only thing keeping them afloat.

Despite the poor performance Marcus offers $200K for a full third of the company so that they can be equals. The money is to be used to buy inventory, create new products, new packaging, and to payback Mark’s dad’s investment of $20K.

This is a pretty generous offer considering the circumstances.

The problem with the product lines is that Mark is fixated on packaging which often includes a box and a story about the particular candle inside it. At the same time he basically ignores the candles themselves. When everyone including Marcus tells him that his scented candles barely have any scent it appears to go in one ear and out the other. When his friend who own a gigantic candle shop tries to tell him that people only want the candle for its scent and look and have no interest in the packaging and story, Mark gets defensive.

After Marcus introduces Mark and Sam to companies that can do their manufacturing for them he’s horrified to discover that Mark has been ignoring them. This is despite the fact that Marcus has laid down the law multiple times with Mark on the matter by explaining to him that if he can’t learn to work with these companies, the deal’s off. In prior scenes you can see Mark freaking out over the fact that he won’t be micromanaging everything if he does it Marcus’ way.

Finally, Marcus puts on his Oprah hat and does some fast shop floor therapy to divine why Mark digs his heels in just when progress is about to be made. As usual it works. 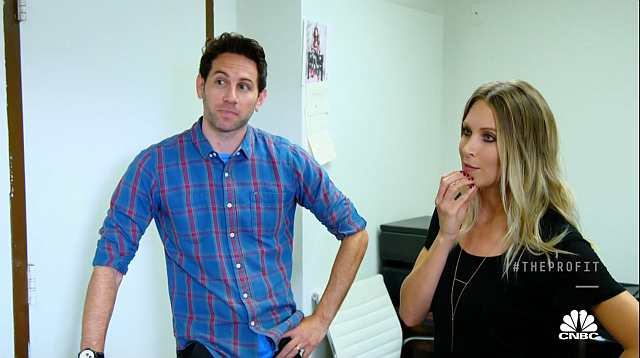 Marcus challenges Mark to develop a new line with a 50 margin that can retail for $25 to $27. No more over-packaging and stories. The focus is to be on the candle itself and its scent. The specifics of the new business growth strategy are:

Until the therapy session Mark was exhibiting all the classic symptoms of being a Be-Your-Own Bosser instead of an entrepreneur. BYOBers are control freaks who cannot trust and delegate anything to others, including their own employees. Businesses run by BYOBers rarely grow past a minimal level. They tend to grow just to the point where anymore growth would require trust and delegation to employees and outside partners. Then they plateau and stagnate.

Due to Marcus’s pushing Mark was able to break through that wall that was keeping him small.

2 Responses to The Profit: Marcus and Wick’ed Candles