The Profit: Marcus and FarmGirl Flowers

FarmGirl Flowers was launched in 2010 by Christina Stembel. The company is located in San Francisco which contributes to a fatal mindset problem. To put it bluntly, Christina has a grossly over-inflated idea of what her business is really worth because of her proximity to Silicon Valley with its absurdly high valuations for tech companies. Unfortunately for Christina, an old school flower shop is going to have to settle for a much more modest valuation. As a result, it’s seemingly next to impossible to reason with her about an investment. Every time she doesn’t get the response she wants she gets teary-eyed and pulls out the victim card.

Unlike most big florists, FarmGirl Flowers sells only domestically grown flowers. It’s one of the company’s two main positioning tactics. The other is that every day it sells only one product, a daily bouquet arrangement. However, you can have it in several sizes and with a vase or without.

Christina explains to Marcus that she hopes to sell off the company for a huge pay day so that she can then play venture capitalist herself investing only in women-operated businesses and “be a champion for women.” When she said that it sounded as if she was quite impatient to get to where she could flip FarmGirl which I didn’t take as a good sign. Investors want to back entrepreneurs who are in it for the long haul rather than watching the clock like a bored school boy.

The company has shown some impressive growth since 2010 going from zero in sales to $2.9 million. Unfortunately there’s a problem. There’s never been any net profit and Christina isn’t even drawing a salary. On top of that she has racked up $80K in credit card debt.

She has made an unspecified number of attempts to pitch FarmGirl as an investment to local venture capitalists but all have passed on the deal. She blames sexism but there just may be other factors at play. There usually are.

There’s an element of drama emanating from the fact that Christina is concerned about how it might look (mostly in her own mind) if she accepts help from man, in this case, Marcus. This comes up several times and starts to grate after about the third iteration. Christina also lets slip out the fact that her husband has a job and has been supporting her since 2010.

Christina also confesses that she experiences a great deal of stress over the possibility that competitors may leap frog her company. FarmGirl would be easy to copy. 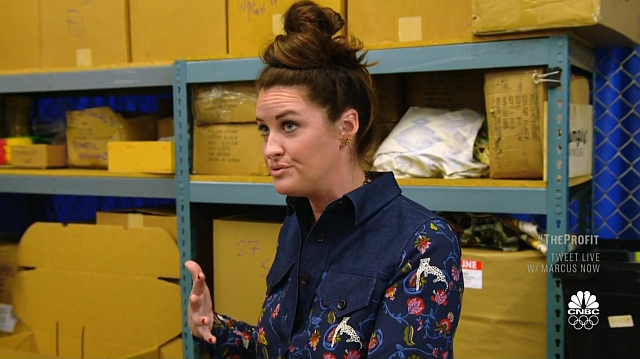 Christina Stembel talks to Marcus about her troubles with attracting investors.

When Marcus sits down with her in a restaurant to present his offer, Christina cuts him off at the pass and presents her own offer first. She demands a cool million for just 5% of the company. Marcus is flabbergasted as we all are. As I explained above, she’s been led astray by the tech company valuations being reported daily by the news media. Moreover, there is really nothing proprietary about FarmGirl. Anyone with a rudimentary understanding of how florists work and some basic marketing chops could easily copy her business model at this stage.

After a bit of back and forth with the goodwill rapidly evaporating away, Marcus presents his original offer. One million dollars for 25% of the business, plus he will arrange for a $500K line of credit. She initially refuses but finally counteroffers with 10%. Marcus counters with 20%. He then begins to feel insulted and rightfully so because this is turning into the second episode in a row where the guest clearly just wants a check from him and nothing else. Marcus expresses this suspicion but Christina doesn’t even attempt to deny it.

The two then agree to disagree and Marcus exits.

I have to add here that this is probably the largest and most generous offer he has ever made to anyone over the three seasons. Frankly, I didn’t see what he saw in FarmGirl. It’s basically a high hustle business that can be copied easily by anyone.

It would have been interesting to learn what growth strategy Marcus had in mind for FarmGirl but now we will never know. Most likely it would have included opening one or two more strategically located warehouses to reduce shipping costs. It would have also no doubt included a rebuild of the website and the addition of an inbound call center to take telephone orders.

If I find the time I will layout a good strategy for florists. (No promises though.)

Lessons in Raising Outside Capital

I just want to add a few points here about raising capital from angel investors and venture capitalists having had a fair amount of experience in the area. Practically every first time entrepreneur who is turned down takes it personally when it’s rarely the case. Christina keeps telling herself that it’s because she was a woman. It could be but there are other more likely factors at play with both her and FarmGirl which could have led to the rejections. Let’s list them off here.

If you bomb with investors they will rarely tell you to your face why out of a desire to spare your feelings. The best thing you can do then is wait a week so that you can cool down and then contact one of them to ask why it happened so that you don’t repeat the mistakes. Most investors will happily take 15 minutes to explain why they were passed. The worst thing you can do is let your imagination run wild as Christina does.

Finally, business is business. Learn to treat it that way and don’t take every rejection as something personal. People have their reasons for saying yes or no.

7 Responses to The Profit: Marcus and FarmGirl Flowers