Philip Green, owner of, amongst much else, British Home Stores, reached billionaire status faster than anyone else in British history. Today he is worth GBP 3.6 billion and is reckoned to be the country’s fourth richest citizen.

This is the first biography of a man whose aggressive business tactics and brash lifestyle have transformed the staid image of British retailing, and who is likely to remain in the headlines for as Topman long as his ultimate prize, Marks and Spencer, continues to elude his grasp. A middle-class Jewish boy from North London who left school at fifteen, Green started and failed with four businesses before he made it with his fifth venture, Jean Jeannie, which he sold to Lee Cooper for an enormous profit that set him on the road to fame and fortune. 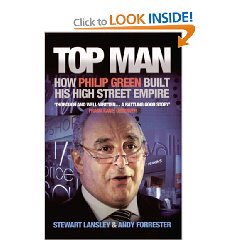 But there were pitfalls on the way; in particular, his involvement with Amber Day, a public company, left him with an abiding dislike for both the City establishment and outside investors. Ever since, he has relied upon a close group of like-minded entrepreneurs, including Tom Hunter the sports shoe millionaire and the Barclay twins, to help fund his buccaneering forays into Britain’s High Streets. The authors describe Green’s takeover and highly profitable break up of the Sears empire created by one of his business heroes, Charles Clore, and his first audacious attempt to seize control of Marks and Spencer at the end of 1999. Frustrated, in part by what were widely perceived as unfair tactics on the part of M&S, Green then turned his attention to the ailing BHS, for which he paid a mere GBP 200 million and then transformed its fortunes to such an extent that, in 2004, he was able to transfer dividends totalling GBP 400 million to his Monaco tax haven.

His appetite unsated, Green then turned his attention to the Arcadia Group, which included brands such as Miss Selfridge, Top Shop and Dorothy Perkins before making another bid for M&S in 2004. Again he was foiled, partly because of what he saw as treachery on the part of his former protege Stuart Rose, the man who was appointed by M&S to see off Green’s bid. But there seems little doubt that, given the opportunity, he will be back and that this time the personal grudge between the two men will give the contest an added bitterness.