This was a another good educational episode for aspiring Marcus Lemonis types. Rather than being distracted by the issues of highly dysfunctional owners, Marcus was able to immediately get down to business with Mr. Green Tea’s management. In the Planet Popcorn and LA Dogworks episodes the audience was tipped off early through editing that the owners were going to be difficult to work with if not downright impossible. With Jacob Maarse Florists, the owner’s last minute on camera reneging on the deal and outrageous denial that Marcus had sunk well over $150,000 into his business came as a shock. We all knew that Hank had an immature streak in him early on but no one was expecting such a shocker of an ending. Thankfully with Mr. Green Tea we could get back to more interesting business lessons.

People: The episode editing quickly revealed that the family owning the business is comprised of good people. Richard, the dad, being dad and in his fifties is a bit conservative about making big changes in his decades old business. He’d react positively to Marcus’s ideas and then get cold feet. Michael, the son, in contrast, was not only committed to taking over the family business but on expanding it as well. Lori, the mom, understood the potential in Marcus’s growth strategy and acted as the all-important tie-breaker.

Personally speaking, I would have found working with the three of them a pleasure and you could tell that Marcus did. There was no need to make management changes initially although professionals will have to be added as the company grows from $2 million to $50 million.

Product: The initial Mr. Green Tea product line is a solid success within its niche of local Asian restaurants and the company has the expertise to quickly design and add new lines such as Solo Gelato. Marcus’ idea to develop an umbrella brand called Keyport Creamery is brilliant too since the product expansion would not have worked under the Mr. Green Tea label.

Process: This is where the growth bottleneck was. The company’s reliance on co-packers was choking off its growth. With co-packers you book production runs far in advance. It’s often months in advance. If just before a run starts you get a sales order in for twice as much, it’s too bad. The co-packer has you booked for 9 AM to 3 PM Friday during which its production line can only make 9000 units and not one more. Say bye-bye to the extra sales. Say bye-bye to growth.

On top of all this, the co-packer’s services were reducing the company’s Gross Profit by 20%. Ouch!

Needless to say, the company was in a very bad spot when Marcus came along.

The Deal: Marcus offered $600,000 for a 35% equity stake in the company. I actually found this to be a very generous offer as I was expecting him to ask for 50% given the circumstances. Basically the company was trapped in a hole from which it couldn’t escape without a sizable capital injection like the one Marcus was offering. The icing on the cake for the company in the deal is that after a month or so Marcus disappears and becomes a silent partner who can be called for advice when needed. It’s not as if he was going to be moving into the company’s offices and hijacking operations.

The $600,000 investment proposed by Marcus would have doubled the company’s margins by eliminating the need for co-packers and even more importantly given it total control over its production. The flexibility to accept new business at anytime and quickly fill orders would enable the company to sell aggressively to new accounts and launch additional lines. “You guys want to triple next week’s order? Sure, no problem.”

There was one huge mistake made here. Marcus trusted Michael’s estimate that it would take only the proposed $600,000 investment to build the new factory and have it ready for business. This number sounded very low to me. Marcus later discovered to his horror that it was actually going to cost $1.3 million to get the job done. If and how their agreement was revised as a result was not made clear. I walked away with the impression that Marcus had decided to simply bite the bullet and accept a longer payback period on his investment.

Words to the wise: Trust but always verify.

Whenever a business owner decides to sell his or her business there is a degree of seller’s remorse that kicks in. We see how Marcus handles it in the scene with him and Richard down by the water. Richard made the right decision.

Did you notice the savvy financing trick Marcus used with the banker? I am glad that they showed it. However, the editing of that scene was a bit odd. At first Michael negotiates with the banker and drives the price of the factory down from $275,000 to $240,000. They are about to agree on that price. Then Marcus suddenly jumps in and tells the banker that instead of buying the building he’d like to buy the bank’s note on the property for $240,000. Why did he do this? The difference is that Marcus and his partners become the former owner’s new creditors and have the right to seize and sell off additional assets put up by him as collateral for the mortgage. According to Marcus, by doing it this way he could probably liquidate those other assets for cash and thereby effectively reduce the price for the factory from the $240,000 to $140,000.

Serial business buyers sometime use this tactic to force the owner of a troubled business to sell to them. If a deal can’t be reached due to say a bad case of seller’s remorse, the buyer goes to the bank, buys the bank’s note, and becomes the business’s creditor. The buyer then informs the owner that he’s calling the loan and that the owner has two choices: 1) immediately pay off the loan or 2) sell the business to the new creditor.

If a business is already in trouble it can rarely raise the cash to pay off a creditor. As harsh as this maneuver may seem, it is often the best solution for an owner who is just digging a deeper hole for himself by the month.

This is a gem of a small company with great potential. It can quickly go from $2 million to $50 million as Marcus envisages. On top of that it’s run by nice people. Here’s wishing them all good fortune.

I really do love The Profit and hope it returns for a second season.

If you’re a serious entrepreneur and not just another lookie-loo, find out how Marcus plays the game of business. 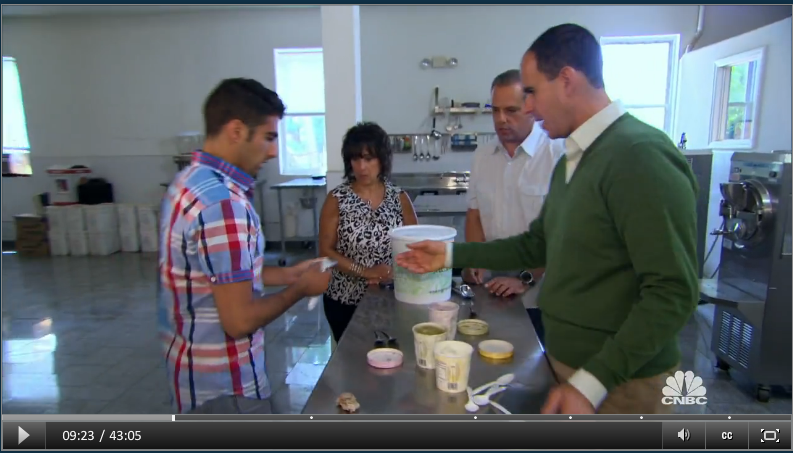 To watch the show click on the image. CNBC doesn’t allow embedding.

6 Responses to The Profit: Marcus and Mr. Green Tea