Small Business vs Entrepreneurship vs Capitalism

If you are trying to get a handle on The Tycoon Playbook as some still are, I think this may help.

Think of the business world as having three separate rungs. At the bottom you have the small business rung. The consensus definition of small business is that it’s primarily about having a steady pay-check for oneself with a little extra left over, hopefully, for the Golden Years. As a result, typical small business owners are concerned with playing it safe, taking as few risks as possible, and basically maintaining the status quo. Once a small business owner has reached a certain level of income their focus shifts to merely maintaining it rather than increasing it. Many small businesses can be found along the proverbial “Main Street.”

On the next rung up is entrepreneurship. Entrepreneurship is an entirely different game. It’s about marshaling resources and taking calculated risks to create something new that will hopefully reward the founders with substantial wealth. Entrepreneurship has no allegiance to the status quo. Rather it’s about starting from scratch and disrupting the marketplace. Most entrepreneurial ventures will be found in emerging industries and fast growth markets. 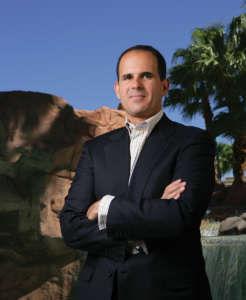 Marcus Lemonis from The Profit is an example of a modern capitalist.

A few years ago I found myself in a heated exchange with a college business professor who was claiming that there is no difference between small business and entrepreneurship. I was flabbergasted by his inability to see the obvious differences.

The highest and most lucrative rung is capitalism. Capitalism is simple to grasp if you think of it this way. It’s about using capital to acquire more capital. To make the concept as simple and clear as possible, it’s about starting with a single cashflow, in most cases, and then using it to keep acquiring more cashflows until the clock runs out.

If you study how billionaires have made their fortunes over the past 200 or so years starting with the first tycoon, Commodore Cornelius Vanderbilt, you will see that wheeling and dealing in assets is the most proven route to great wealth. Most people today don’t understand this because for the past 15 years the media has been obsessed with the Internet and technology wunderkind.

This narrow focus has led the masses to conclude that the Internet is the only road to wealth creation. However, for every online success story you hear about there are hundreds of failures, and I am only counting the teams which had a shot a success. I am excluding all the one-person blogs and sites that comprise 99.9999% of the 250 million domains registered as of December 2012.

To put it bluntly, there’s just too much competition online today. All of the low-hanging fruit that could be picked by the little guy or gal was gone ten years ago. Today you need a high quality team and financial backing to go after any online opportunity still worth pursuing. Another serious problem with doing business exclusively online is the culture. No one under a certain age wants to pay for anything anymore. They expect everything to be free. Finally, Google’s now quarterly algorithm updates have made it extremely difficult for new sites to rank well. If you are going to make it online today you need the true commitment necessary for 12 to 15 hour days of constant fine-tuning and testing. The Internet Gold Rush is officially over in case you hadn’t heard.

How to Get Rich Today

So, let’s get back to old school capitalism. Most people associate it with tycoons such as Warren Buffet and Carl Icahn and assume that the game is out of reach for them due to all the usual excuses. What they don’t realize is that there are thousands of mini and up-and-coming tycoons out there quietly rolling up assets and building empires of varying sizes. They will always be out there creating wealth while shunning the media limelight and time-wasting cyber-culture bullshit like the current social media fad that has all the lemmings distracted. One of the major pluses of going the tycoon route is that you end up selling goods that people have to pay for. You don’t deal in bullshit online fads that come and go every few months.

The Internet isn’t going to change how people chew gum. That’s the kind of business I like. – Warren Buffett on his acquisition of Wrigley

This why I hope Marcus Lemonis’ new reality show The Profit succeeds and inspires people. Marcus is a perfect example of an old school tycoon accumulating cashflows. He could be the poster boy for The Tycoon Playbook. The Gores brothers, Tom and Alec, are two more examples of tycoons. These men remind us that there is another way to get rich for those who aren’t technological wiz-kids. Not everyone is suited to programming smartphone apps for 15 hours a day, months on end, while tucked away in a cubicle. Some of us are people-persons who prefer interacting with other humans. Being a tycoon is more about having good horse-trading sense than almost anything else.

Capital is that part of wealth which is devoted to obtaining further wealth. —Alfred Marshall, economist

Learn how to play capitalism successfully.

8 Responses to The 3 Levels of Business