The Profit: A Review of Marcus’s Growth Strategies

In the second episode of season 3, Marcus returns to some of the companies he invested in during season 2 to show us how they are doing. To be frank, I would have preferred a regular episode at this point with Marcus focusing on what he does best which is creating growth strategies for small business. The review episodes are best left for season’s end.

So let’s look at what we learned last night:

First off, what a transformation we saw since the novelty baseball bat company moved into new production facilities bankrolled by Marcus. It’s like the difference between night and day. The new location appears at least four times the size of the old one and everything is arranged to maximize production efficiencies.

The big problem is that the owner, Scott, keeps tapping Marcus for more money every month and Marcus keeps cutting more checks. This is a bad habit to get into. As a result, Marcus’s total investment has gone from $630K to $1.4 million in just seven months and Scott still needs more cash. Even the MBA grad, Dan, that Marcus hired to serve as CFO hasn’t been able to stop Scott’s spending.

During Marcus’s visit he discovers that Scott has bought an $85K printer which he hopes will produce mats for the college market. Unfortunately, the market does not exist yet. Meanwhile due to another shortage of cash the company is falling behind on its supplier payments. Marcus then tries to explain that the $85K would have been better invested in existing profit centers. However, I doubt that Scott got it.

This company has real growth potential but Scott needs to have his spending limited to $500 if it’s to survive.

Marcus took a big gamble backing this troubled chain of hair salons because, as he readily admits, he knows nothing about the business. Yet his three part approach of focusing on the 2Ps (i.e., People, Process, and Product) proved just as effective as it’s been with his automotive and food ventures. The chain was recently named by somebody in the industry as one of “20 Best Salons” in the entire country.

What it comes down to is having faith in the 3Ps system that tycoons like Marcus employ to formulate growth strategies and quickly build value into their acquisitions.

Marcus has another winner here.

This did not turn out well at all. If you recall, this was the bizarre Queen’s mini-conglomerate which started life in embroidery and silk screening and then went into a wild expansion phase adding basketball courts, a bad restaurant, and other things, in a desperate attempt to fill up the old warehouse which was its real business. In a nutshell, the partners had an option to buy the building in a few years time and realize a huge capital gain. Stuffing the building with all sorts of bad business ideas was simply a not-well-thought-out plan to make the lease payments until that day came. (Read about its real estate play here.)

Upon returning to the site after a few months Marcus was shocked to discover that all the improvements he had made were gone and Queen’s stitch was back to being the old Artistic Stitch Sports Complex. 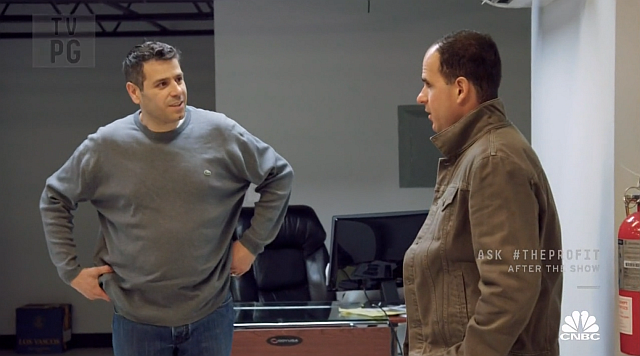 Worse yet, all the money Marcus had given to Sal and Nic was gone and unaccounted for. This included hundreds of thousands of dollars to pay off the three years of back rent (36 X $17K) owed to the landlord. The money was most likely spent on the owners. On top of all that a $27,000 printer Marcus had bought for the company and still owned personally had been sold by Sal behind his back. You just cannot do that.

At this point you have to wonder what Sal’s malfunction is. Is he in deep hock to a Joe Pesci type loan shark because nothing else can explain his behavior? (Well there is, but I won’t go there.)

Sal definitely belongs on the Top 3 List of Worst People seen on The Profit.

It’s too bad the episode didn’t explain how a company could get three years behind on its rent without being evicted. How does such a commercial real estate owner even stay in business? Most owners would have put padlocks on the doors after only a few months. It’s difficult mustering up any sympathy for him as a result.

This is another small scale win for Marcus. He ended up buying out the Bickersons for a one time $60K payment plus a royalty. The company is now in the hands of Sammy a good manager who was also warded with a 20% equity stake. Like a good tycoon Marcus is helping the company grow by selling its pies in his Crumbs chain. That’s the point behind building an empire. It’s all about capitalizing on synergies between member companies.

To conclude, Marcus has now invested a total of $23 million into 23 businesses. While most have paid off there have definitely been a few “bad apples,” to put it mildly. But that’s business and life for you. Marcus’s growth strategies are definitely paying off.

Find out more about how Marcus builds his empire.

2 Responses to The Profit: A Review of Marcus’s Growth Strategies