The Profit: Marcus Lemonis and DiLascia

DiLascia is a Los Angeles-based line of clothing with messages.

If you still wear clothing with big words you should check them out.

In this second episode of the fourth season, Marcus is called in to rescue the store which is failing from a combination of none existent management and non-moving inventory.  If Marcus doesn’t cut a check Patrick will be forced to shutter it in two months. Meanwhile Patrick is driving around town in a very nice BMW convertible while his siblings work for him for free.

END_OF_DOCUMENT_TOKEN_TO_BE_REPLACED

Marcus Lemonis vs The Tycoon Playbook

How does the growth strategy used by Marcus in The Profit differ from that of The Tycoon Playbook?

This question comes up on a regular basis since I write about Marcus a lot. How does Marcus’s growth strategy compare and contrast with that of The Tycoon Playbook? Well, I like to use him and his shows as examples of what it’s like in the early days of employing the Tycoon Playbook strategy or “plays.”So let’s start with the similarities:

END_OF_DOCUMENT_TOKEN_TO_BE_REPLACED

Posted in How to Buy a Business | Tagged Marcus Lemonis, The Profit | 1 Comment

The 3 Numbers Marcus Lemonis Really Wants You to Know

As you may have noticed, Marcus is a numbers guy.

The problem is that the owners he meets in about two-thirds of the episodes are clueless about theirs and can’t answer even the most basic financial questions about their businesses.

The three numbers Marcus wants you to know are:

END_OF_DOCUMENT_TOKEN_TO_BE_REPLACED

The Profit: Marcus and Farrell’s Ice-cream

This was a tough episode for me to get through and then rewatch key sections for the write-up due to the garish design. Show me anything with vertical red and white stripes, and I start to feel nauseous. On top of that thinking about all that sugar almost put me into a food coma.

So give credit where credit is due, okay?

Farrell’s Ice-Cream was launched in 1963 when such hokey 1920s concepts were still considered cool. Years later the founder sold the company to a group of investors who then drove it into the ground. At its height it had over 130 locations but was finally shuttered in the 1980s. In 2009 partners Mike Fleming and Paul Cramer brought it back to life. They then quickly opened up seven stores in the Los Angeles area which suffered from poor management. Three of them never generated a profit.

When Marcus is called in only five remain open, the company is sinking under one million in debt, has run out of cash, and payables are being stretched out into the credit shut off zone.

During the inspection tour Marcus discovers that the management team is terrible at merchandising the candy, serves an inferior ice-cream, and has all sorts of bad vibes between the CEO and other senior management team members. Hoo-boy.

Marcus at one point calls the new Farrell’s a poor imitation of the original.

After rightfully expressing his annoyance over the staff stopping to sing Happy Birthday every ten minutes to the accompaniment of a large drum or two, Marcus presents his offer. Considering that there is no cashflow and no assets he will give them $750K based on the trademark and existing five locations. In return he wants 51% of the equity. Mike gasps but accepts. The money is to be used for new kitchen equipment, to pay down the accounts payable, and rebrand the Buena Park location.

By the way, if you are eating in a restaurant for adults on your birthday no one needs nor wants to know it’s your big day. Leave the Happy Birthday for somewhere private. Please.

Marcus then does his thing. He gets better ice-cream for them to serve. He improves the menu and food presentation. Finally he has one of the stores rebranded for a new opening.

Oh and as is usual, he does his Oprah thing and fixes the interpersonal problems and promotes two of the more talented managers, Travis and Shauna.

What would an episode of The Profit be without the last minute bit of drama?  This week the partners invite Marcus to sitdown in a quiet corner of the restaurant and inform him that they need another $200K in cash immediately or the whole chain goes under. You see, they forget to factor in some rent and payables. I’m kind of surprised that Marcus missed this too.

Long story short, the crises is averted by Travis’s recommendation to shut down his own store which is the cause of the problems. Regrettably they didn’t elaborate on how this would create $200K quickly. 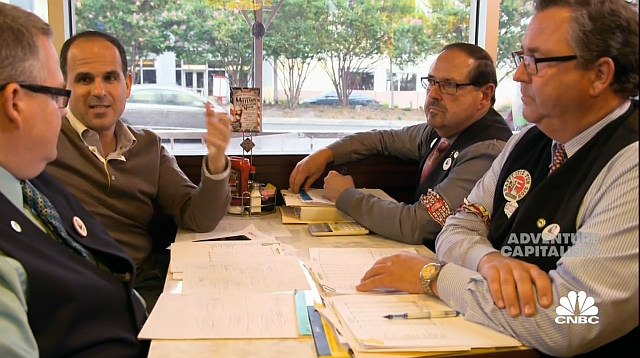 Travis (left) advises Marcus, Mike, and Paul to shut his store down.

The closing minutes show the re-opening of the Buena Park store and a big crowd coming in to check it out.

Will it work?  Probably.  There’s always a market for unhealthy food.

As I have stated before I’m not into restaurants so the episode wasn’t of interest to me.

Good luck to the people at Farrell’s.

The Profit: Marcus and FarmGirl Flowers

FarmGirl Flowers was launched in 2010 by Christina Stembel. The company is located in San Francisco which contributes to a fatal mindset problem. To put it bluntly, Christina has a grossly over-inflated idea of what her business is really worth because of her proximity to Silicon Valley with its absurdly high valuations for tech companies. Unfortunately for Christina, an old school flower shop is going to have to settle for a much more modest valuation. As a result, it’s seemingly next to impossible to reason with her about an investment. Every time she doesn’t get the response she wants she gets teary-eyed and pulls out the victim card.