You hate to see this kind of thing happen.

The deal between Marcus and Stein Meats fell through. Frankly speaking I am not surprised as the company had dug too deep a hole for itself. Apparently the boys weren’t too forthcoming with Marcus in terms of promised cooperation.

Earlier this year Lemonis filed a breach of contract suit against A. Stein for failing to sell him their Brooklyn Burger brand. The meat company did not respond to a request for comment. (source)

However, now it appears that the owners took out their frustrations over the failed deal on the heroine of the story Donna Johnson. Donna was the woman that came up with the idea of calling in Marcus to try to save the company. Going by that episode Donna was the smartest person at the Stein Meats.

An ex-office manager at A. Stein Meat Products has filed a $3 million discrimination and defamation lawsuit claiming her bosses made mincemeat out of her after the reality show’s turnaround guru Marcus Lemonis withdrew his offer to buy half of the company.

Johnson also claims she was paid less than male colleagues at the company. “They (A. Stein) had an opportunity to resurrect their business and when the deal went south, she became the fall woman,” lawyer Walker Harman told The Daily News.

I hope she wins but even if she does she may never see a dollar due to that state of the company. 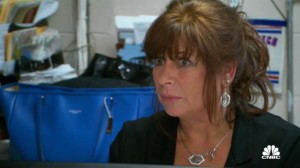 Do You have what it takes to be another Marcus? Click here.