In this final episode of season 2, our man Marcus drives down to Latta, SC to help a mom & pop ribs joint expand.

Shuler’s Bar-B-Que is owned by married couple Lynn and Norton Hughes and their young son Shuler. The name comes from Norton’s father. The establishment was opened in 1996 and is now so famous for its ribs and chicken that people drive 50 to 100 miles just to eat there. It’s typically packed with patrons on the three days per week that it’s open. There’s also a catering department which gets mentioned only in passing.

The business grosses almost one million currently with profits of about 14% or $140K. There’s $86K in debt left to pay off on the 35 acres the business sits on. In other words, Shuler’s is doing pretty good. Norton estimates his food costs to be around 42% when it should be around 32%. later we discover that they are actually about 60%. 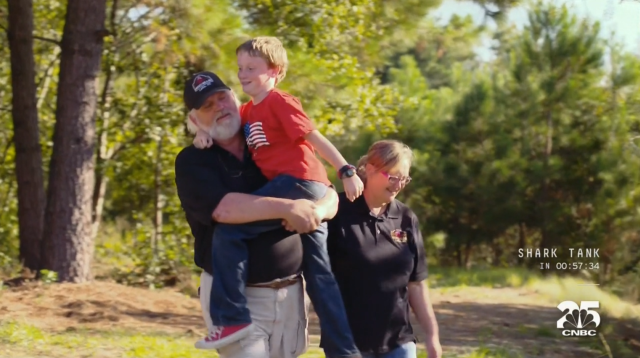 While the main products associated with the name are ribs and chicken, Marcus sees wider potential for Lynn’s biscuits by selling a mass market version through grocers.

The place is an all-u-can eat type business which oddly enough is open only three days per week: Thu, Fri, and Sat. The other four days are used to prep for the open days. The price of admission for adults is just $13.95 which Marcus thinks needs to be bumped up to $15.00.  The set up inside is inefficient partly due to there being just one cash register. This creates long lines. Norton also insists on cash only and no credit cards because the credit card companies take 1.5% of every dollar. There are also far too few tables considering the demand.

Lynn and Norton are high energy workers. They and their crew hustle to feed the teeming masses that do up to 100 mile round trips in order to gorge themselves for only $13.95. All is well on the people front except for Ewell the brother-in-law. He’s married to Lynn’s sister who Lynn wants to move back to Latta. There’s been some talk of Ewell working for Shuler’s in some never defined PR or marketing capacity. The problem is that no one can figure out what Ewell brings to the table to justify participation. Every time he’s asked what he does, he makes vague references to doing “some Facebooking and Twittering” for the business.  Marcus finally gets fed up with the vagueness and tells him that young Shuler can do the Facebooking, which is true. When you have long lines outside your door every day the last thing you need to worry about is Facebook.

[I must fight hard here to resist delivering my standard harangue about how social media is pretty much a useless tool for anyone but celebrities and certainly not something you want to try to make a living from.]

Things finally come to a head when Marcus broaches the topic of how much Ewell expects to be paid if he comes on board. The answer is a shocking $200k. This is from a small business approaching $1 million in sales. This is when Marcus decides enough is enough and uses the same tactic that worked so well in the Pete’s Candies episode for getting rid of deadwood. He offers Ewell the manager’s job. Ewell is then gone within a few days to no one’s surprise. He later sends an email advising Norton and Lynn that he can’t any do anymore “pro bono work”for them. Pro bono, in case you don’t know, is a Latin term for “work undertaken for the public good without charge, especially legal work for a client with a low income.” In other words, this is not only a ridiculous thing to say but an insulting one as well to people who have a thriving business and don’t really need Ewell. He should have just said, “You know, this is just not going to work for me” and left it at that. No need for a long-winded explanation.

Marcus offers $500K to build a general store and increase the seating space.  In return he asks for 40% of the equity, the real estate as security, and distribution rights for Lynn’s biscuits which he sees as the product with the most potential. Norton counter offers with 35%. Marcus responds with statement that his first offer is always his final offer. Hmm, not really. Just look at the previous episode where he backed off from 50% to only 30%. Marcus has backed off other times as well in response to objections and counteroffers.

This time Marcus gets his way.

Marcus rejects the franchising growth option and informs everyone that he will only build out the existing location. This includes:

-Increasing the seating by having an outside deck added to the restaurant.

-Increasing the price to $15 per adult.

-Finding another supplier who offers a substantially lower price on the ribs.

-Adding a gigantic flag post out front to fly a flag so big that it can be seen from outer space.

-Opening the restaurant a few more days per week once all the process bugs are worked out.

Marcus won’t be pleased to read this but I have to say it. This wasn’t a good deal for either party.

First off, there’s nothing in the deal that Norton and Lynn could not have done themselves if only they had tried. It probably would have taken spending $10K with a good consultant to hear the same ideas. (Well, maybe not the giant flagpole one.) The expansion could have been funded with a bank loan. They should have just said “no thank you” and used his ideas. If the deal had been for 25%, I would have supported it.

Second, for Marcus it’s a business with a limited upside potential since he has ruled out opening more locations. Frankly the idea of selling the biscuits through grocery chains is pretty weak. While those biscuits served piping hot with a restaurant meal may make your mouth water, buying an altered mass market version in a package and eating it at home doesn’t excite me.

Don’t get me wrong. I think this is a great business for the family but I just don’t see it as having the type of upside that a guy like Marcus needs to justify the investment and risk.

I hope Shuler’s continues to be a success as they seem like very nice people.

12 Responses to The Profit: Marcus Lemonis and Shuler’s Bar-B-Que