The Profit: Marcus and The Soup Market

This episode was a bit more interesting in a business sense than the first two of the fourth season, and I will explain why in a moment, but first things first.

The Soup Market was launched by Dave Jurena in 2004 with a 50/50 business partner who died suddenly in 2015. The other fellow was the business brains behind the venture while Dave was and remains the cook.

The Milwaukee based chain sells what Marcus calls “heavy soups” due to their unhealthy doses of calories and sodium. As the heavy-set Dave explains, he doesn’t create soups for the “bikini crowd.”

Although it quickly became painfully obvious that Dave was going to be nothing but trouble, I was hoping against hope that it would all work out because I love soup–and don’t even get me started on clam chowder! 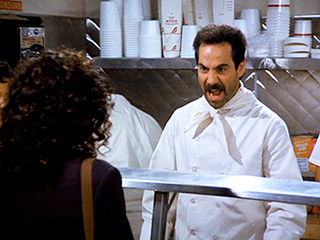 Dave informs customer that he’s not into “healthy.”

This week’s drama revolved in part around a mysterious woman named Grace. Dave got very defensive whenever Marcus inquired about her. Very defensive indeed. Hasn’t Dave heard about The Streisand Effect? I suppose not. The bigger drama revolved around Dave’s resistance to absolutely every idea that would benefit his struggling operation. Like little Mikey in the classic 1980s TV cereal ads, Dave hates everything.

Despite recognizing that if Dave was a superhero he’d be ResistanceMan, Marcus offers to sink in $315K for 50% of the business plus total control. I personally would have run in the opposite direction. Ten minutes in all the alarm bells were klanging away at an eardrum shattering pitch.

Marcus then gives him a check and has one of the stores redesigned and given a new menu of soups that won’t gradually kill the customers.

The grand reopening looked like a success but when Marcus returned a couple of weeks later he discovered to his horror that ResistanceMan had undone all of the improvements. Every. Last. Single. One. The business is back in failure mode.

At the very end Marcus gets a call from Grace, who as it turns out is Dave’s operations manager, informing him that she’s been not only fired but was escorted off the premises by police. She also lets Marcus know that she has filed a sexual harassment case with the EEOC against Dave.

At this point Marcus finally decides to follow what would have been my advice after the first half day with ResistanceMan and walks away from the deal despite having blown $100K on the store rebuild. Ouch.

Now lets move onto why it was a decent episode from a business perspective.

-I found it odd that Marcus still proceeded with trying to do a deal after being informed by Dave that he was in a battle with his former partner’s estate over how much money it should receive for its half of the equity.

-During my years in business brokerage I got to meet a fair number of Daves.  They would contact me when they decided it was time to sell their business, and I would have to politely refuse the listing after a meeting because there was typically little of value there to attract a buyer. The most common reason is that people like Dave are what brokers commonly refer to as BYOBers (Be Your Own Bosser). BYOBers typically start a business because they are otherwise unemployable but have a single skill with which they can make money. Perhaps it’s cutting hair, repairing bicycles, making tool & dies, or building websites? The particular skill doesn’t matter.  What matters is that BYOBers have little if any interest in anything that isn’t their core skill. Book-keeping? Operations? Marketing? Technology? Staff?  Fuggadaboutit! In Dave’s case, it’s all about designing new soups like the peanut butter one. The heavier the better. Nevermind that most customers don’t want to feel as if they have a one pound stone in their stomachs after a bowl of his soup.

-The above is why so many small businesses fail within the first few years and why the survivors typically plateau at some level well below their potential. The takeaway here is that business owners should focus on mastering the basics of management instead of losing all their time personally doing their core skill.

-There’s an old adage about avoiding fights with the media that you may have heard: “Never pick a fight with people who buy ink by the barrel.” – Mark Twain

I simply marvel at all the people who apply to be on the show and then reveal themselves before the cameras to be terrible examples of humanity.  It takes someone who is completely lacking in self-awareness to do this. Never be a jerk on a TV show if someone else does the final editing.

-There’s a rule in hiring that says “hire for attitude and train for skill.” ResistanceMan exhibited the worst possible attitude when he tore out all the improvements Marcus had paid for.

If you hire for attitude you won’t be wrong 99% of the time.

-Finally, what you see is what you get when it comes to people. Only a fool expects them to change.  Sometimes it seems that Marcus doesn’t get this but it’s more likely that he has to stick with an opportunity to get enough footage for a 40 minute episode.

Looks like Dave just torpedoed his business with this media fiasco.

6 Responses to The Profit: Marcus and The Soup Market